A look back on the 2021 GV volleyball season 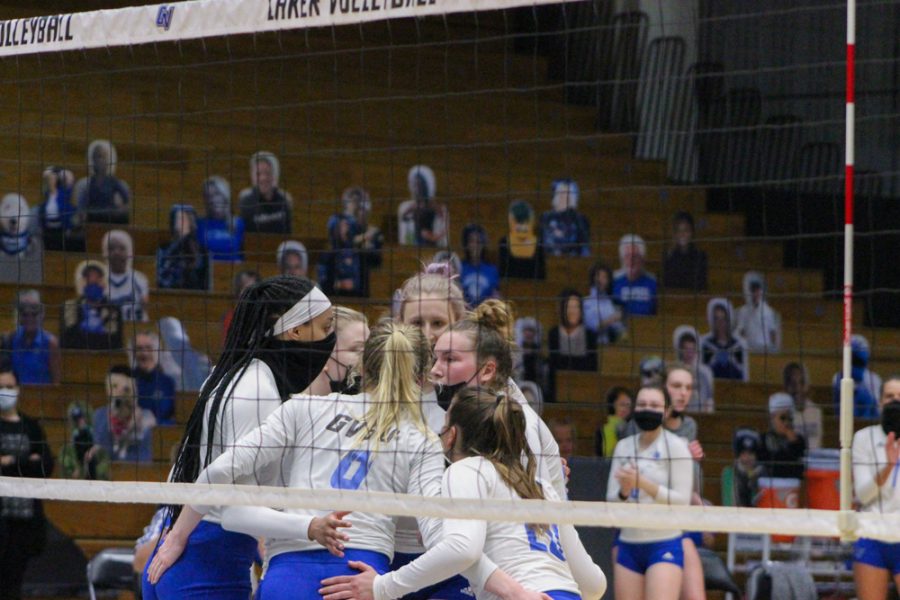 The 2021 Grand Valley State University (17-10) volleyball season concluded in an unfavorable fashion in December, as they were swept by Hillsdale College in the first round of the NCAA tournament. However, there were certainly great moments throughout the season for the Lakers and things they are looking to carry with them and improve on heading into the offseason.

Perhaps the biggest moment of the season for the team was securing an NCAA tournament birth, which was the first time for the Lakers since 2015.

Junior outside hitter Abby Graham said the highlight of her final season was the watch party with the team, where it was revealed they would have the chance to compete in postseason play.

“We were all in the Fieldhouse and we all kind of had a feeling that we were going to be in (the NCAA tournament),” Graham said. “Jason (coach Johnson) was pretty confident, but for us we were like, ‘what happens if we aren’t?’ So we were all pretty nervous, pretty excited, and when we found out that we got into the postseason tournament, we all just got so excited.”

A key to guaranteeing that birth was a late-season surge in which the Lakers won eight of their last nine regular-season games, ending the regular season 17-8.

“It was a stretch of the year where our kids worked well together, competed well together, supported each other on the floor, and things went our way,” said coach Jason Johnson. “I also think two of those weekends we were finally at home and we only had three weekends all year where we played at home.”

Another important stretch for the Lakers was a quick two-day trip to Michigan’s upper peninsula early in the season, with showdowns against Northern Michigan University and Michigan Technological University. GVSU won both matches and delivered MTU its only conference loss on the season.

“It definitely turned our season around,” said sophomore Rachel Jacquay. “I think it was just our grit; it was our determination to beat them.”

However, despite the late-season success and defeating the top team in the conference, the Lakers’ season still had its moments of frustration, including a 1-5 start to the year and a pair of losses to rival Ferris State University.

Although 1-5 wasn’t an ideal start for the Lakers, it wasn’t unexpected. In late July of 2021, former GVSU head coach Deanne Scanlon stepped down after 26 years with the program. Johnson was then asked to take over the head coaching position after several years as an assistant in the program—a tall task to accomplish with only five weeks until the first match of the season.

Johnson said one of the biggest adjustments in taking over as the head coach was the new dynamic of the relationship between himself and the players.

“That transition relationally with your players from being an assistant coach to being a head coach (was a challenge),” Johnson said. “It’s not that it devalues the relationship, but I think it just changes it.”

Along with the coaching change, the first six matches were all on the road against difficult opponents including multiple schools ranked amongst the top 25 in the nation.

Even after the Lakers hit their high moments on the season, Johnson said he never quite felt like the team hit its full potential.

“I felt like our kids got better as the season went along,” Johnson said. “But there were pieces there along the way where I just felt like we couldn’t get them into a groove and a flow for most of the season.”

The Lakers did finish with five All-GLIAC honorees, two of which they are losing to graduation, Graham and fellow outside hitter Ali Thompson. Both four-year starters, Johnson said trying to replace both their production and leadership on and off the court is nearly impossible.

“I don’t think we have an answer to replace them at all right now,” Johnson said. “I think we have some young kids that will be getting some opportunities.”

“My hope is that (bringing in the two transfers) creates a stronger connected competitiveness within our gym,” Johnson said.

Johnson and the Lakers will begin some offseason training within the next couple of weeks, in hopes of preparing for another chance at making a run at the GLIAC title, and a second-straight NCAA tournament birth.