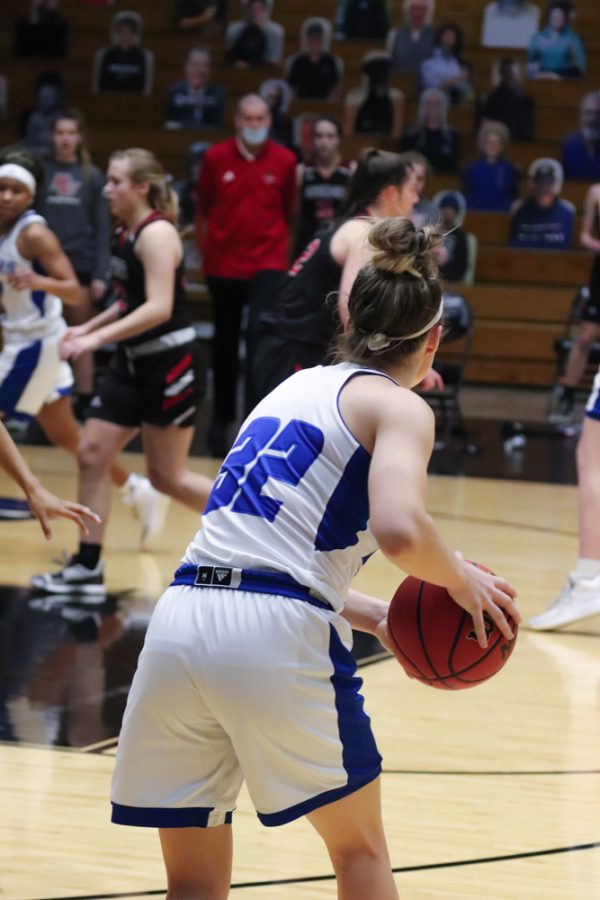 To add to the already high stakes of every GVSU-FSU sporting event, the two teams came in tied for first place in the GLIAC with each school holding a record of 5-1 in conference play.

The Bulldogs got off to a quick start in the contest, jumping out to a fast 10-4 lead with 6:48 remaining in the first quarter. However, the Lakers would hold them to only three points for the remainder of the quarter and end on two three-point baskets from junior guard Emily Spitzley to give the Lakers an 18-13 advantage heading into the second quarter.

GVSU coach Mike Williams said his team’s competitiveness on the offensive end was one of the many keys to being able to gain and maintain their lead throughout the course of the game.

“I think the biggest thing is, when we miss a shot or they make a mistake, they aren’t afraid to come down and take the next shot,” Williams said.

The Lakers would continue their upward momentum as freshman point guard, Ellie Droste, had an impressive nine-point quarter to help boost the halftime lead to double digits.

“The middle of the paint was really wide open,” Droste said. “I feel like they were sucking down onto shooters, especially with Emily’s (Spitzley) last game that she just had, so that really opened things up for me.”

However, the Bulldogs would not give up, going on an early 9-0 run at the beginning of the third quarter, forcing Williams to take a timeout.

“We called a timeout and our players responded,” Williams said. “They were focused, they knew what they had to do and went out and did that and bumped that lead back up, so it was good to see.”

Out of the timeout, freshman forward Rylie Bisballe put in a layup to end the run for the Bulldogs and help the Lakers end the third quarter on a short 7-2 run of their own.

Once again, in the fourth quarter, the Bulldogs cut the Laker lead to five with 2:58 remaining in the final quarter of play. On the ensuing possession, Spitzley was fouled on a two-point attempt and would hit both free throws to extend the lead seven, which set in motion one final run to put the Bulldogs away.

Spitzley scored seven of her team-high 22 points in the fourth quarter to hold off FSU. She said that being one of only four upperclassmen hasn’t added a lot of pressure this season.

“I am letting the game come to me more,” Spitzley said. “I think that is helping me play better and helping us have more wins and better results in games.”

Adding to her 22 points, Spitzley also had five rebounds, a block, and made four of her eight three-point attempts in the win. Droste finished with 17 points, five rebounds, and three assists. Bisballe chipped in with 19 points, eight rebounds and two blocks.

Now holding the top spot in the GLIAC Conference, the Lakers will shift their attention to the second-place team in the GLIAC, Michigan Technological University (10-4), as they are set to face the Huskies on Thursday, Jan. 20, in Houghton, Michigan.