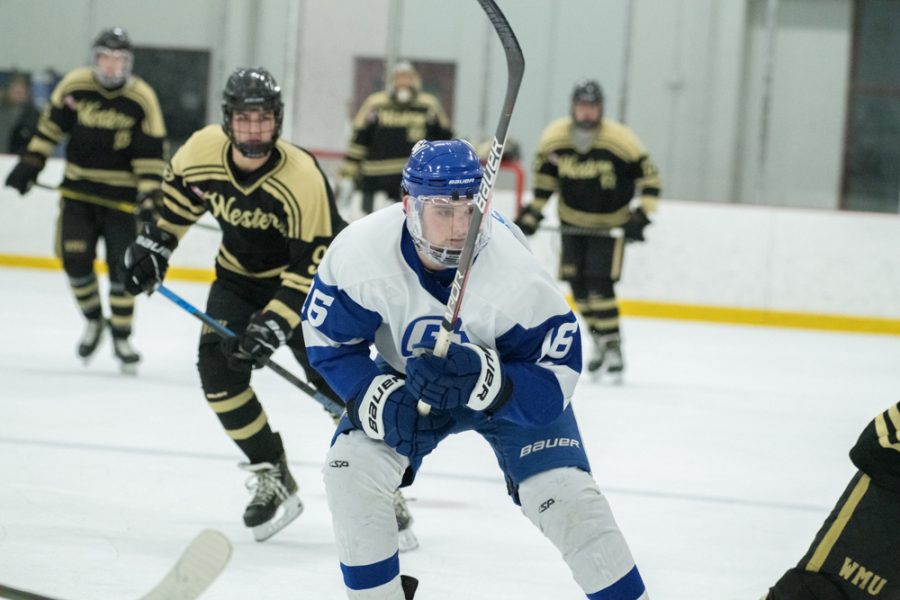 After a few days off during winter break, the men’s DI club hockey team has gotten back on the ice to resume their regular season play. This past weekend, the team has run into scheduling issues that seem to be finding every sports team across the state of Michigan, but the Grand Valley State University team has been fortunate in finding replacement games on the fly.

With a cancellation from Calvin University and then Adrian College, GVSU found themselves competing against Western Michigan University this weekend. The teams faced off Friday night, Jan. 14, with GVSU taking the win 3-1, followed by Saturday night’s game tripling their points with a final score of 9-1.

Coming off the win from Friday night, the team looked to have some of their momentum roll over into Saturday’s game, scoring two early goals within the first two minutes of play.

“We really didn’t make any adjustments,” said junior wing Shane Haggerty. “I think their goalie stood on their head yesterday and today we got a couple early. We really didn’t change anything because we had them yesterday.”

“Last night I thought we played a really good hockey game,” said coach Carl Trosien. “It was a 3-1 game, and then tonight was one of those games where, yeah, a couple pucks find the back of the net early and then you’re off and running.”

Halfway through the first period, the Stallions were able to find a goal to avoid a shutout game, but that would be their last of the night.

Sophomore center Nick Sommerfield found one more opportunity before the end of the first with an assist from Haggerty and Andrew Dundas to bring the score up to 3-1.

With just two minutes left, freshman defender Clahassey found an assist from Hoffman and sent one into the back of the net to finalize the second period scoring 8-1.

At the start of the third period, Kippe found his hat trick goal for the night assisted by Sommerfield and Haggerty again to end the scoring for the rest of the game.

“I got to give it to my line mates,” Kippe said. “They were just making great passes, finding me out on the ice, and breaking it out easy. It’s just kind of all five guys on the ice working as a unit, you know, us giving it to the defense and the defense giving it back to us and then just winning puck battles.”

The successful wins proved their growth as a team, coming off an entire missed season last year and a huge recruitment class, the juniors have had to step it up this season in more ways than one. The team’s first year in DI has also brought on a lot of new challenges opponent-wise, but the youthful team seems to be making strides towards a successful first Great Lakes Collegiate Hockey League (GLHCL) conference.

“Part of it is just, we’re coming together, we’re figuring some things out, guys are getting comfortable playing with some guys, and we’ve got some lines that have been together for a little bit,” Trosien said. “You put a freshman up there, you give them an opportunity and then that line does what it does the last two nights. Putting Sommerfield with Haggerty and Kippe has been really productive.”

Showing their improvement and strengths isn’t over yet, as the next few weeks will continue to push them through another scheduling mess with the COVID-19 wave.

“The hardest thing is, now we’ve got six conference games that we have to get played before the end of February, so it’s going to really congest things the next seven weeks here on,” Trosien said. “We’ve got to cram some games in somewhere, it’s going to get wild, but the boys are going to get to play a lot of hockey.”

With a busy couple of weeks ahead before the GLCHL conference starts at the end of February, Trosien has been working hard to find as many games as possible to make up for lost time. With one last game for the long weekend, GVSU lost on Sunday, Jan. 16 against Adrian College 4-6.

Holding their position tied for second in the conference, the team hopes to see this further improvement as postseason play approaches.

“It’s going to come down to us, Davenport University and Calvin,” Trosien said. “We’ve kind of figured that. I like where we’re at right now for year one.”

Coming up, the Lakers will be taking on Roosevelt University on Jan. 20 and 21, featuring the “Pack the George” game on Friday, both at the home Griff’s Georgetown ice arena.