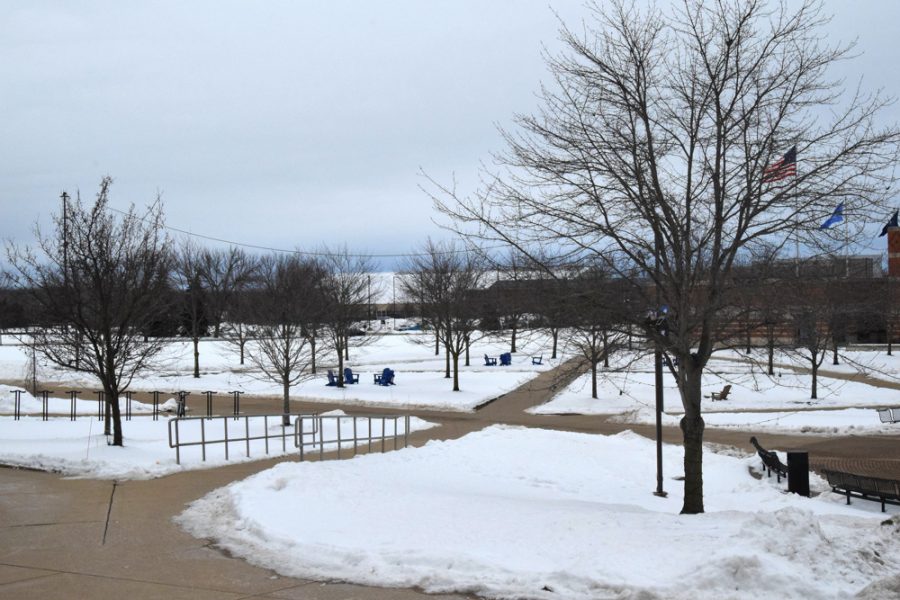 When Grand Valley State University students returned to campus after winter break, they were met with piles of treacherous snow and ice covering the parking lots and sidewalks.

GVSU staff attribute the extensive ice and snow on the grounds to both how the weather came in, as well as staffing issues that have led to attempts to “re-prioritize” how the school handles snow removal.

This leaves the question of how the winter weather will be managed for the remainder of the season.

Steve Snell is currently in charge of snow removal operations at GVSU. He said the iced-over parking lots and sidewalks during the second week of January were “perfect for ice build-up.”

“We received 14 inches of snow, non-stop from Wednesday through Friday with temperatures below freezing,” Snell said. “ Friday night we salted everything, putting out 30 tons of salt. With the slight warm-up Saturday, then plunging temperatures that same day, all that salt we put out just sat there.”

When temperatures are below freezing the salt doesn’t work as efficiently as it does around 30 degrees Fahrenheit, thus leading to difficult ongoing ice problems.

Additionally, Snell said this year GVSU has contracted an outside operator, different from previous years, to clear parking lots and help supplement staffing shortages. The contractor comes in during the night and plows faculty, commuter and residence lots.

Even when plowing occurs during the night there are still problems with completely clearing lots for the next day.

“It becomes a big challenge for them when there are illegally parked cars there overnight,” Snell said. “They maintain a certain distance from those cars, so as not to damage them, which in turn, leaves a decent amount of snow left behind.”

For residence lots, however, warmer temperatures are needed for proper snow removal due to sitting cars leading to compacted snow and ice. When it’s warmer, those parked in residence lots will receive an email from housing about when and where to move their cars to allow plowing to take place.

GVSU grounds staff are in charge of snow and ice removal on both academic and housing sidewalks. They attempt to prioritize clearing the most used sidewalks, and then move to smaller side walks near residence halls.

Junior Claire Berndt said she noticed the difference between the main sidewalks and those coming from the parking lots when she almost slipped while heading to class.

As the winter season continues, individuals will have to continue to brace for possible inclement weather conditions. Temperatures in Allendale are predicted to be continually at or below freezing in the coming weeks.

“The biggest take away is this is West Michigan,” Snell said. “We can get a lot of snow, so plan ahead, wear the correct shoes for the conditions and take your time.”

Berndt agrees, and said dressing for the cold and the ice is the only way to combat it.

“Layer up, Laker up, it’s the same thing,” Berndt said. “Wear gloves because your hands get really chilly. It’s not embarrassing wearing a lot of clothes to class.”