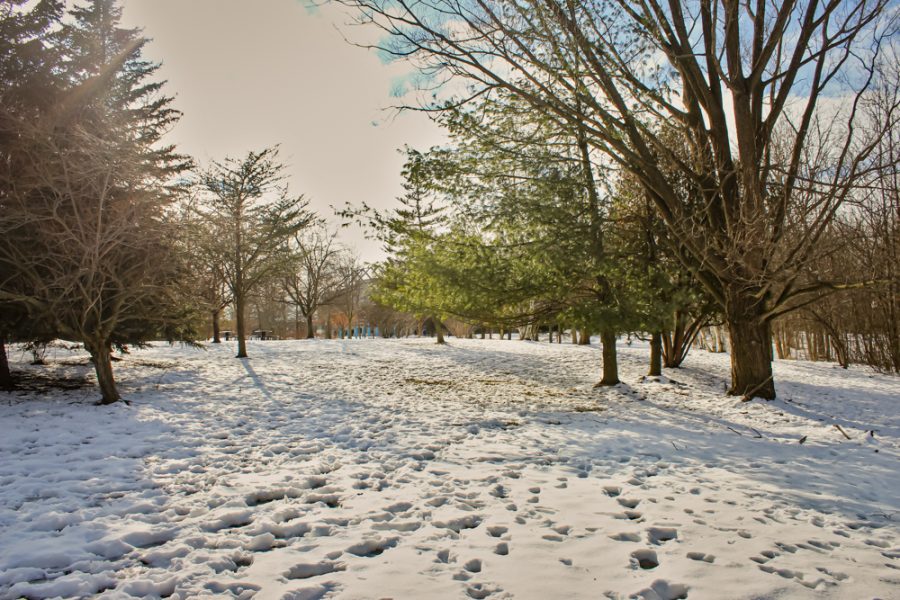 For many students at Grand Valley State University, the arboretum is an aesthetic feature of the Allendale campus. For the Biology Department, the arboretum now serves as the perfect location to study the local ecosystem.

Affiliate professor Jenny Jenkins is currently leading a group of students in a field study of black-capped chickadees, a common species of songbird in Michigan.

The study, which Jenkins said she is hoping spans 40 two-hour trial sessions, looks at the feeding habits of these birds under the pressure of different threats.

Data is collected on how individuals interact with a feeder under auditory predator calls, as well as the visual threat of a stuffed Cooper’s hawk set up about five meters away.

Not only will Jenkins’ research look at how black-capped chickadees act under predator threats, but it will also add on to previous research done to examine a bird’s behavior in a cage test.

Jenkins and her team caught and banded the birds last fall, as well as studied them in bird cages to see how they behaved in a controlled environment.

Now in their natural habitat, Jenkins said they can use their previous observations to see if these birds’ true personalities differ in any way and analyze the spectrum of behaviors in black-capped chickadees.

“When I started graduate school 20 or 30 years ago, it was kind of frowned upon to talk about personalities in animals,” Jenkins said. “Then, in the psychological literature and animal behavioral field, people started saying, ‘Hey, wait a minute, consistent differences in behavior are out there, let’s look at some individual variation.’”

By looking at the individual birds and assessing their behaviors, Jenkins says they can study how a bird might act in a life-or-death situation.

The field study has given Jenkins’ students an opportunity to not only learn more about complex animal behaviors but to also dive deeper into their future fields and develop useful research skills.

Pope said he was enthusiastic to join the field study and that he gained valuable insight into field work, data analysis and communication during research.

“Whenever you’re taking part in experiments or anything with science in general, you learn how to communicate and you learn how to cooperate,” Pope said. “The thing that I’m really trying to do is learn how to listen to people because the more perspectives that you can listen to, the more accurate conclusions you’ll be able to come to at the end.”

Although the experience has been a cold one so far, Jenkins and her students said they are enjoying their time collecting data in the Arboretum.

“There’s been a couple times where we’ve been playing the sound or the stuffed hawk has been present and an actual Cooper’s hawk swooped overhead,” Pope said. “The other day I was out there and had gotten near the end of the trail when all the birds started freaking out. I looked up and there’s a Cooper’s hawk sitting on a branch 20 meters away from the feeder.”

Through this field study, Pope said he has gained a new fascination and appreciation for the interesting animal behavior he’s gotten to experience here on campus.

For GVSU students and other community members interested in looking in on their research, Jenkins and her students said they are hopeful that they can learn to take time to look at the world around campus and appreciate the diverse Allendale ecosystem.

“I think we study behavior for our own curiosity,” Jenkins said. “We as humans are interested in the natural world and always have been. Moreover, I think teaching people that having an awareness of the natural world is a valuable thing to be doing. It’s important to take a look at the world around us to not so much focus on this human centric kind of philosophy that we seem to have.”