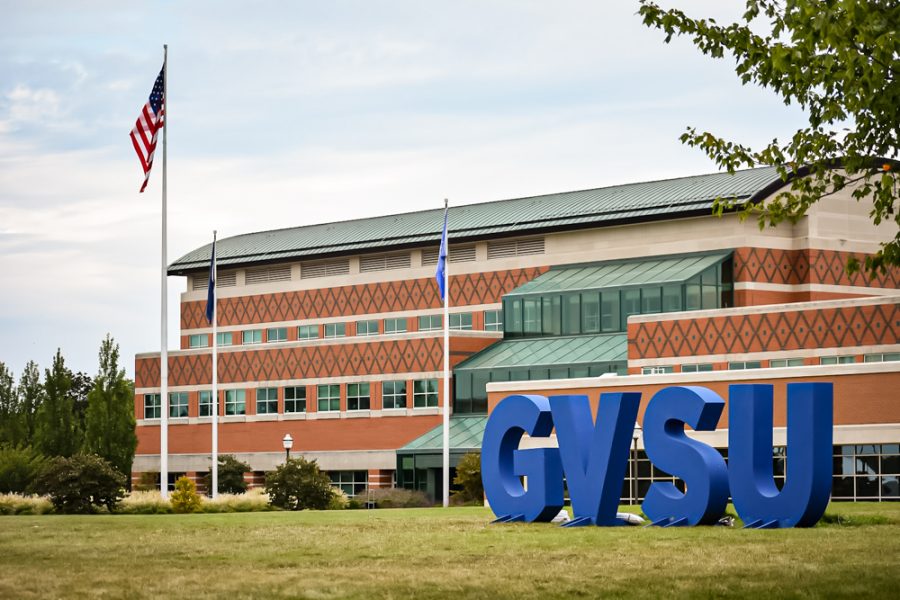 RH2025 is a guide constructed by the university and its administrators. Academic plans exist to provide information about the direction of a university, including their goals in academia and what their students can expect from them.

For most colleges, these plans last roughly five years before another one is drafted. This gives universities time to implement the document fully and see short and long-term results.

The Reach Higher 2025 website provides a snapshot of the current draft. This overview of the RH2025 plan includes a statement of five values: inquiry, inclusive and equitable community, innovation, integrity and international perspectives. Next, the plan details GVSU’s vision and aspirations, mission and strategies, which include empowered educational experience, lifelong learning and educational equity.

After opening reports from Interim Provost Chris Plouff, and Student Senate President Autumn Muller, the Dean of Brooks College of Interdisciplinary Studies and RH2025 Steering Committee Co-lead, Mark Schaub, began the meeting with a presentation that highlighted the differences between the first iteration of the plan and the updated version.

Schaub also highlighted what steps the university took to allow GVSU community members to voice their concerns and ideas.

Changes to the document include improvements to syntax and clarity, as well as literary fixes regarding parallelism.

Parallelism refers to other plans that work in tandem with RH2025, such as the Strategic Enrollment Management Plan, the Digital Transformation Roadmap and the Division of Inclusion and Equity. All three programs will work alongside the RH2025 plan and help fulfill some of the goals identified in the strategic plan.

Other changes include the removal of certain bullet points that were deemed “redundant” in regard to the idea of an empowered education experience that the plan presents.

A land acknowledgment was also added to recognize GVSU’s existence on the land of the Anishinaabe people, an addition that aligns with the principle of educational equity that is also key to the RH2025 plan.

There was a general consensus among UAS members who spoke during the meeting that the RH2025 plan was improved since October and that many of the concerns had been properly addressed.

When the RH2025 plan was presented to UAS on Oct. 1, 2021, members responded with concerns about vague language used in the document, calling it “jargon-laden, unclear or open to multiple conflicting interpretations.”

In a memo to GVSU President Philomena Mantella in October, UAS pointed to the lack of language regarding GVSU as a liberally-educated institution, as well as faculty’s unclear role in the implementation of the plan.

There was positive feedback regarding changes to the specificity of certain intentions, a deeper explanation of the role of faculty in implementing the plan and more.

Professor of Sociology and President of GVSU’s American Association of University Professors (AAUP) chapter, Joel Stillerman, said the revised plan also highlights GVSU’s identity as a liberal arts institution, which was a concern voiced by faculty when the first iteration of the plan was proposed in October.

“It more forcefully articulates our liberal arts tradition, the essential role of faculty expertise and research in our mission and clarifies some of the language regarding new university initiatives,” Stillerman said.

Stillerman said the RH2025 Steering Committee responded to faculty concerns by expanding the RH2025 committee, which he believes contributed to its endorsement.

“I suspect this was largely due to the addition of more faculty members on the RH2025 committee who effectively articulated faculty concerns as well as feedback the committee received,” Stillerman said.

One of those additions included Janet Winter as a third Steering Committee Co-lead.

Alongside Mark Schuab and Tara Bivens, the Steering Committee was able to continue hosting virtual events to gather feedback and concerns from the GVSU community. This included a faculty leadership series and a staff leadership series.

These events, dubbed “Leadership Conversations,” encourage open dialogues between community members, forgoing formal presentations in favor of an open forum where anyone with questions, concerns, feedback or suggestions was welcome to share and be heard.

These events will continue to be held throughout the winter semester.

The addition of more events to gather feedback was planned by the Steering Committee after the rejection of the original proposal.

“All voices are important in this process, and therefore, the timeframe for working on the plan has been expanded and new opportunities have been developed to provide community members additional means for providing input before finalizing the plan,” Provost Chris Plouff said in a prior interview.

Multiple UAS members also acknowledged the commitment they put forth to ultimately endorse the RH2025 plan.

Professor of English, Brian Deyo, said he is proud of the groups’ determination to improve the plan.

“I think it says a lot about us as a community that we’re coming together and we did our best to be able to improve this document and improve what we do at this university,” Deyo said.

With the plan now endorsed, GVSU will move on from the previous academic plan constructed in 2016, when former president Thomas J. Haas was still in office.

However, the endorsement does not signal the end of work on the RH2025 plan. UAS president Felix Ngassa said that minor changes may still be made to the document as it is implemented into life at GVSU.

“It doesn’t stop today, it doesn’t mean that’s it,” Ngassa said. “This is a living document.”