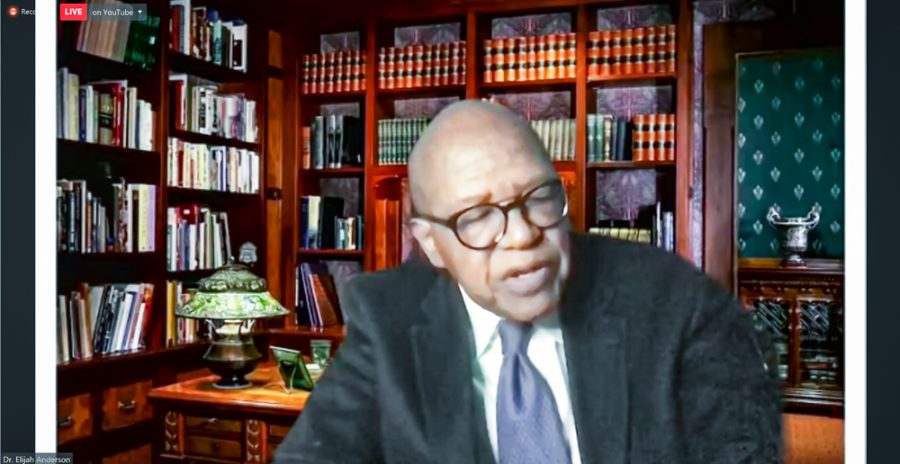 Grand Valley State University’s Hauenstein Center partnered with the Division of Inclusion and Equity to create a week-long series of events to commemorate Martin Luther King Jr.’s legacy. These events were held in Grand Rapids, Allendale and online in order to reach as many interested people as possible.

On Thursday, Jan. 20, Dr. Elijah Anderson, sterling professor of sociology at Yale, was invited by GVSU to speak about his recently-published book, “Black in White Space: The Enduring Impact of Color in Everyday Life”.

Before he took the floor, fourth-year student and Peter C. Cook Leadership Academy fellowship candidate Analise Anderson introduced the webinar with anecdotes about the trials and triumphs of the fight towards racial equality.

“Knowing and understanding our history is how we can learn from the past and continue to the future,” Robinson said.

Bernal concluded by presenting Anderson’s latest ethnographic work, “Black in White Space”. The book analyzed personal experiences, current events and other occurrences in order to paint a picture of modern-day racism. It won the 2021 Stockholm Prize in Criminology.

Anderson introduced the idea of ethnography, describing it as the systematic study of culture and the research method being done when the scholar puts their body right in the field and spends time with real people listening to what they say and what they do make sense of it all.

Ethnographers take this knowledge and share it with the world, Anderson said. His experiences visiting different communities in Philadelphia are congregated together in his book.

“I’ve been with corporations, streets, communities, defended all kinds of people, Blacks and whites to get this understanding; this body of work I’ve created over the years,” Anderson said.

The basis for his research is on stereotypes of the “ghetto” that follow Black people as they navigate their lives in the U.S., Anderson said. These stereotypes started to come out during the major racial incorporation that the U.S. has gone through over the past 50 years. However, this racial integration also started to create unspoken white and Black spaces that continue to perpetuate harmful stereotypes.

“While present in the white space, the anonymous Black person is typically burdened with a negative presumption that he or she must disprove before being able to establish mutually trusting relationships with others; a presumption that is often hard if not impossible to overcome,” Anderson said.

Anderson’s book dives further into the idea of being Black in white spaces and the presumptions that are made within those spaces, as well as further critical analysis of his research in Philadelphia.

After Robinson spoke, GVSU’s Chief of Staff to the President and Vice President for Inclusion & Equity Jesse Bernal spoke on the importance of discussion in improving GVSU’s campus climate, including talking to those we disagree with.

“We (the Division of Inclusion and Equity) inspire action towards institutional and systemic transformation,” Bernal said.

A recording of Anderson’s speech can be found on the Hauenstein Center’s YouTube channel at www.youtube.com/user/HauensteinCenter.