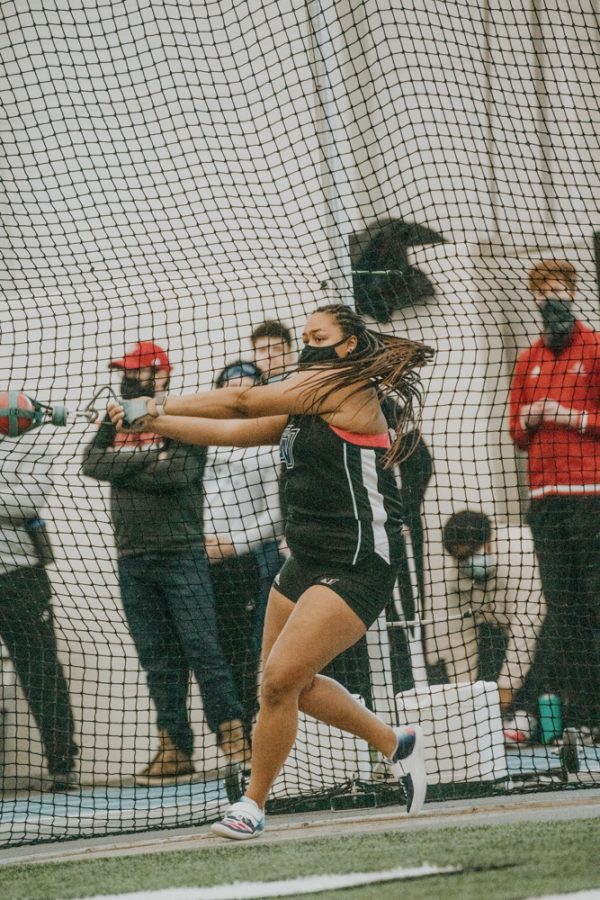 The Grand Valley State University men’s and women’s track and field teams competed twice on Jan. 22. The first meet of their double-header saw the teams travel to Ann Arbor, MI to compete at the Michigan Invitational, while they hosted the Mike Lints Alumni Meet later that day.

During the Michigan Invitational, five athletes placed. The 4x400m relay team of senior Jackson Blanchard, graduate student Caelon Harkey, freshman Brandon Miller and sophomore Myles Rhodes won the event, finishing with a time of 3:14.99. Blanchard also finished second in the 400m, running a time of 48.97 and fifth in the 60m dash, crossing the finish line in 8.2 seconds.

Harkey and Rhodes finished third and fifth in the 400m, running times of 49.15 and 49.47 respectively. In the 200m, Miller crossed the finish line second, in 21.76 seconds. Joining these athletes was senior Makiyah Smallwood, who finished third in the 60m hurdles, running a time of 8.07.

“We sent (the athletes) over there, just to run in a different atmosphere, and hopefully (the athletes) got out of their comfort zones,” coach Jerry Baltes said. “Some of those guys opened up really well in December and again last week, so hopefully they continue to take the next step.”

During the Mike Lints Alumni meet, both the men’s and women’s teams saw a plethora of athletes place in the top five.

In the women’s field, senior Elli Kimes, senior Carly Livingston and junior Colleen Campbell swept the pole vault, recording vaults of 3.96 meters and 3.71 meters. Junior Judith Essemiah had her best performance of the season, throwing a 19.86m in the weight throw, good for second place in Division II.

Placing just behind Essemiah was sophomore Aliana Omonode, who threw a DII provisional mark of 17.59m. Freshman Mackenzie Bohrer threw a personal best 14.43m in the shot put. Rounding out the field events for the women were sophomores Jenna Doyle and Sydney Cangrilla, who took first and second place in the high jump, clearing 1.61m. The height was a season’s best for Doyle and a personal best for Cangrilla.

On the track, the women saw success in the mile with senior Allie Ludge and freshman Taryn Chapko placing first and second with running times of 4:50.45 and 4:51.12.

“We’re still six weeks away from nationals,” Essemiah said. “I think the plan right now is just to stay consistent, try and perform well every single weekend and use these meets to qualify for nationals.”

“I would like to get top three at nationals in both of my events, shot put and weight (throw), so that’ll be the overall goal,” Kerner said. “(To achieve that) I need to be consistent. Every weekend I’m coming out and throwing as good as I can and getting good marks. Moving up my average throw distance will be my biggest goal.”

Joining Kerner on the leaderboards in the weight throw was sophomore Shane Byrne and junior Jacob Urban, who placed third and fourth respectively. Byrne reached a personal best with his throw of 18.86m and Urban reached his first provisional mark, throwing a personal best 18.50m.

On the track, junior John Groendyk placed first in the mile, crossing the finish line after 4:08.36 for another personal best of the day. Senior Marcos Garcia was not far behind him, running a time of 4:08.60, and sophomore Scott Spaanstra finished fifth, running a personal best time of 4:10.56.

“In other sports, you’re worried about wins and losses early in the season, but right now, we’re just working on building upon each week, both from a training standpoint and a competition standpoint,” Baltes said.

The team will return to the home track on Jan. 28, where they look to continue their hot start to the season at the Bill Clinger Classic.