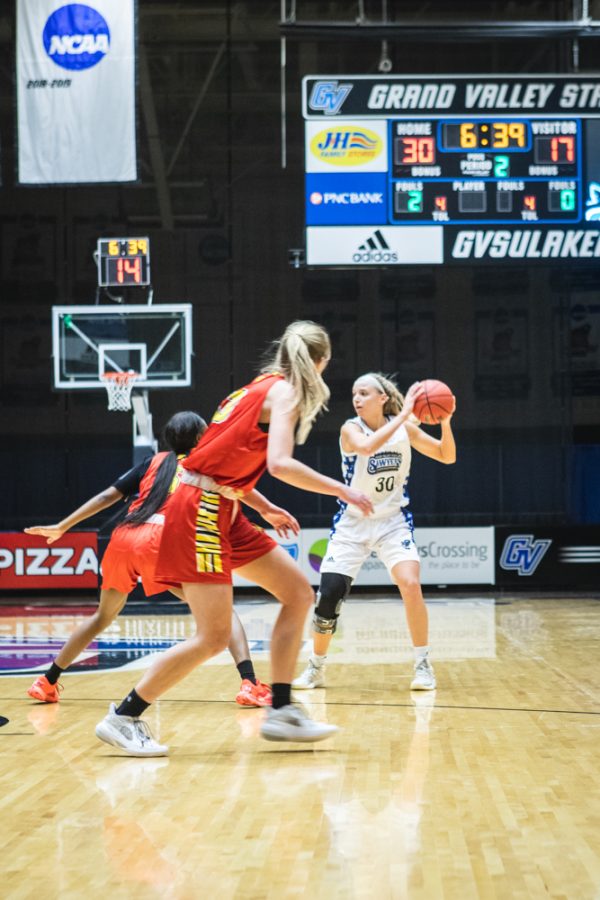 The no. 12 ranked Grand Valley State University women’s basketball guard duo, senior Emily Spitzley and sophomore Ellie Droste, have always been a major part of each other’s lives on and off the basketball court.

“Our parents have been friends since they were in high school,” Spitzley said. “So our families are like family friends. We have gone on family vacations together for our entire lives.”

On the court, the pair found a great deal of success in their high school careers as teammates at Pewamo-Westphalia. In their first season together, Spitzley’s junior year and Droste’s freshman year, the two helped lead PW to the MSHAA state championship game. However, they fell short, losing to Detroit Edison Public School Academy 44-42.

Although making the state championship game was a great experience, both Spitzley and Droste said their favorite moment playing together actually came in the first game of their tournament run, which was a matchup with their rival school, Bath.

“They (Bath) were in our conference, so we played them twice a year,” Droste said. “We lost to them the first time and then the second time it came down to the very end and we lost the game. So coming into the tournament we knew they were a really good team. They beat us twice, we just really wanted to win and we did end up winning that game.”

In the following season, Spitzley’s senior year, Pewamo-Westphalia once again found themselves matched up against Detroit Edison in the postseason, this time in the state semifinals. The result was the same, as Pewamo-Westphalia fell short and the chance for the Spitzley-Droste duo to win a state championship together came to an end.

“We wanted to be a really good high school team and that was really the first thing on our minds,” Spitzley said. “We wanted to win a state championship and we made some really good runs at it while I was there.”

Spitzley then graduated from Pewamo-Westphalia and made the decision to play at the next level for the Lakers, a choice she said was an easy one.

“I always wanted to go here (GVSU),” Spitzley said. “This is where we went to all of our team camps together—me and Ellie—out in the dorms and stuff, and we had been around campus so there was nowhere else I really wanted to go.”

With Spitzley at GVSU, it left Droste and Spitzley’s younger sister, Hannah Spitzley, who now plays DI basketball at Western Michigan University, with another chance to win a state championship. The third time was the charm for Droste, as she helped lead Pewamo-Westphalia to a state championship in her junior year.

Droste didn’t get the chance to attempt a repeat, as COVID-19 cut her senior season at Pewamo-Westphalia short and left her with a decision; whether or not she wanted to play basketball at the next level.

“A big deciding factor (in coming to GVSU) was for one, having Emily, because it is just comforting having someone here that you know,” Droste said. “It also isn’t very far away (from home) and I just really like Grand Valley and am familiar with the area.”

Now, with Spitzley and Droste reunited at GVSU, they have picked up where they left off in their time together at Pewamo-Westphalia. Spitzley currently leads the team in scoring with nearly 14 points per game, while Droste is third on that list with 11.9 points per game. The production has also led to team success, leading the Lakers to a 14-1 record and first place in the GLIAC with a 7-1 record in the conference.

“Our entire team is just working really hard this year and I feel like last year was a really young group,” Droste said.

Their reunion also allows for the duo to have two more chances at redemption to potentially win a championship together. Spitzley is taking advantage of the extra year of eligibility granted by the NCAA due to COVID-19 and is returning next season for her fifth year.

“I just love basketball, I love playing, I love being in the gym,” Spizley said. “I wouldn’t give up an extra year of that, really, for anything.”

The Lakers currently control their own destiny in the conference after a big win last Jan. 20 at Michigan Technological University, which was sitting at second place in the GLIAC. Spitzley hit a buzzer-beating three-point shot to send it to OT where the Lakers would win the game 74-70. Droste finished with a career-high 31 points and the Pewamo-Westphalia alumni combined for 51 points in the win. Winning out would give them a regular-season GLIAC title and allow them to host the postseason GLIAC tournament.