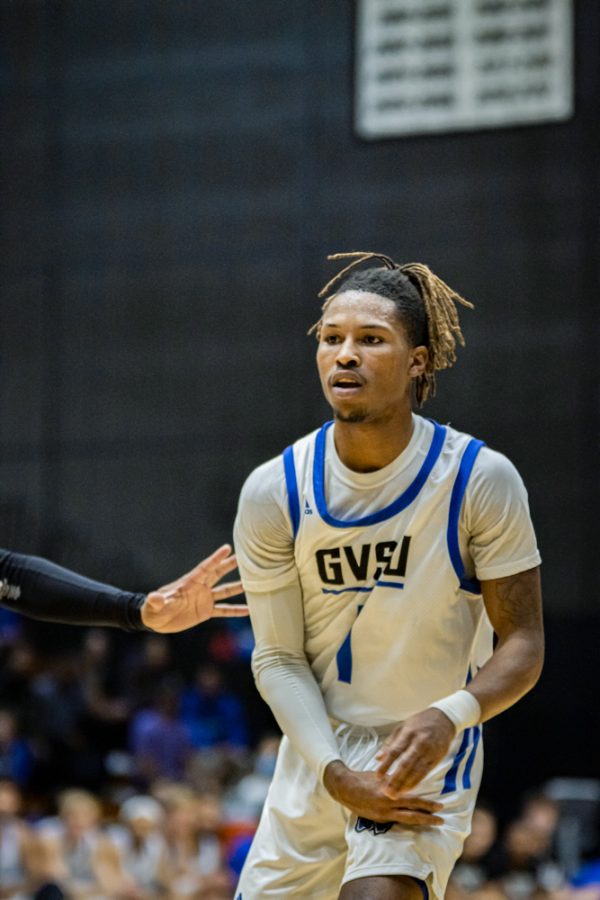 This season’s roster for the Grand Valley State University men’s basketball team has a healthy number of returning seniors filling leadership roles, one of which includes senior guard Jordan Harris. In order for a team to be successful the coach always needs a leader. This is where Harris seems to have found his spot.

The 6’1″ 170-lbs guard is a big part of GVSU basketball’s success so far this season. Harris transferred to GVSU in 2020 after two years at Adrian College. During his sophomore year there he took off leading the squad in minutes played with 860 and came up three short of the team lead for a career-best with 430 total points.

“My first day on (GVSU’s) campus was my first time on the campus,” Harris said. “I didn’t get a chance to meet the team or anything before I got here. My first day here was meeting the team and seeing campus and everything. I was kind of surprised about the campus and my teammates.”

Last season, Harris made his Laker debut on Jan. 9, 2021, against Saginaw Valley State University. He started all 19 games while averaging 12.7 points and 3.5 rebounds on 33 minutes per game, and became the player coach Ric Wesley expected him to become.

“The best thing about Jordan is that he’s an everyday guy and very focused,” assistant coach Taylor Johnson said. “He’s so focused and wants to win so bad; he wants to help the team whether it’s passing, defense, shooting. He’ll do whatever you ask, so he’s a pleasure to have on the team and definitely the most focused guy day-in and day-out.”

The hard work and dedication has continued throughout the year, helping his team to 12-3 overall and 6-2 in GLIAC halfway through this season. Harris has averaged 10.9 points and has a team-high 60 assists so far this season. Even with the great start, Harris said this isn’t the best they can be.

“I think we have a really good team for sure,” Harris said. “I don’t think we’ve played our best basketball yet, but I know it’s coming. We’ve got to keep digging down, take it one game at a time and figure out a way to win every single time we play.”

Now here for his second year at GVSU, Harris has embraced the leadership role. The fifth-year senior using his COVID-19 eligibility has helped the coaching staff and his teammates in big ways this season.

“Being the point guard, I always have to be vocal,” Harris said. “(I) answer and ask questions if I’m not sure about anything and be humble. Being a little older than the young guys, when they come to me with questions, they get those same questions back to them.”

With 12 regular season games remaining on the schedule, Harris says he looks forward to the rest of the season and expects the team to give it their all every time they’re out on the court.

“I just look forward to having fun with my brothers and making sure we are coming out and getting wins,” Harris said. “That’s our biggest things; we don’t want this season to be full of ups and downs, we want a lot of upside to this season and I think that’s just going to come with being focused and making sure that we’re ready each and every single day. Take it one day at a time; just make sure we get better every single day.”

Harris will graduate from GVSU this April and says his main goal is to play professional basketball after this year. However, his biggest goal is to keep working.

“I’m not sure where or how that’s going to come about,” Harris said. “I don’t know of what I would want to do outside of basketball yet, but my biggest goal is keep working so that I can find something to where I can keep playing basketball after this year. But right now, we got a lot of season left, so I’m just trying to lock in on this and then I’ll worry about that stuff after.”