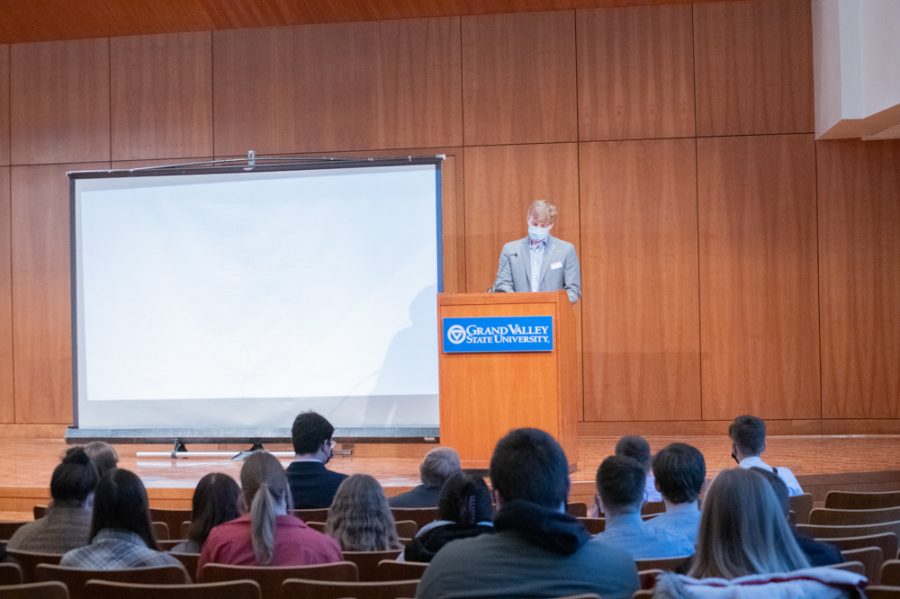 The Grand Valley State University Student Senate Cabinet recently gathered in the Cook-Dewitt Center Auditorium to give their State of the Student Body address to the campus community.

The opening speech was given by Student Senate President, Autumn Mueller, which included updates, achievements and ambitions from each of the seven vice presidents, as well as the body’s executive vice president.

Mueller used the speech to outline, and elaborate on, the major focuses of her position.

Mueller said it’s these three areas that coalesce into what she sees as the Student Senate’s true purpose.

“Government in its essence is to support a collective unit that does the work that which it is elected to do for the best of a society and the group that it represents,” Muller said. “And that is true with student government as in Student Senate – a student group that is advocating for actions and notions that students are passionate about and feel best represent their needs.”

Last semester the senate sought to tackle a range of issues, which included expanding open educational resources, increasing mental health awareness through their non-profit Battle of the Valleys partnership and forming the University Food Committee.

As the new semester begins, the senate is aiming to take action on multiple areas, like campus dining and the presence of standardized tests in GVSU’s admissions process.

The issues the senate addressed in the meeting fell under the purview of the senate’s seven current standing committees.

Executive Vice President, Jim O’Neil, said the continued presence of the different committees is a reflection of the senate’s ability to solve various issues.

“We are able to look at any situation we face through a number of lenses to help us represent all students in their diverse, ever-changing needs,” O’Neil said.

Providing senators with chances to be as involved as possible in the process, O’Neil said, is integral to the senate’s work, and will help continue it into the future.

“We are just as diverse in our experiences and thinking as the entire GVSU population,” O’Neil said. “We were able to take a student population of individuals and turn it into a unified body.”

The senate were not the only leaders to recently address their efforts in bettering schools like GVSU.

The cabinet’s address came one day after Governor Gretchen Whitmer’s State of the State address, in which she introduced bipartisan efforts that set aside billions of dollars for public colleges and higher education institutions.

“Together, we made the largest education investment in state history without raising taxes – something we’ve done three years in a row,” Whitmer said in the address.

According to House Bill 4400 signed into law last September, in addition to a one-time $2.8 million supplemental payment to the university at the end of the last fiscal year, the state will allocate $74.2 million to GVSU for the new fiscal year running through Sept. 2022.

The allocation is a $723,100 increase to the university over last year’s state appropriations.

Whitmer’s words were imbued with optimism, similar to those from the Student Senate cabinet.

“The state of our state is strong and getting stronger every day,” Whitmer said in the address.