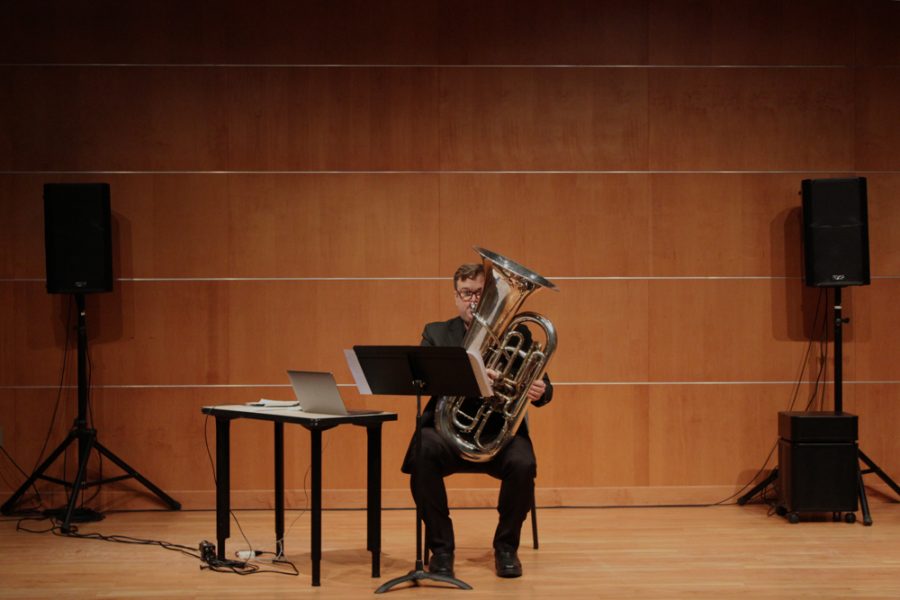 The concert featured tuba music mixed with electronics. Carlson explains that the mix is created through computer playback.

“What makes these pieces interesting is how intertwined the tuba as a solo voice is with the tracks,” Carlson said. “The tuba blends with the tracks in ways that create new sounds and colors of sounds that the tracks or tuba would not have been able to do on their own.”

Carlson began his journey with a passion for music when he was a kid, as he started to study tuba at the age of 11.

“I joined a band, I liked playing music and that made me like listening to it even more,” Carlson said. “Then I studied it, and it got even cooler.”

Since the pandemic, sharing music has been difficult for many performers and artists, Carlson said.

“As an active artist, it was strange not to share music with my students and the university community in ways that I was used to,” Carlson said. “I still did a recital last academic year, which was streamed only. I think many artists have found new ways to share their work. I’m also very much looking forward to things improving and more live concerts happening with audiences.”

Carlson has traveled throughout the world, studying and performing music. Through his travels, he has discovered much about music.

“Traveling and performing has taught me that you need to be flexible and ready to make changes,” Carlson said. “It has also taught me to remember my musical priorities on the stage.”

In the future, Carlson plans to hold more concerts and wants to continue to celebrate music at GVSU. In the fall, he hosted his own “Octubafest” to showcase music to the GVSU students and explained that his studio would be presenting a tuba and euphonium chamber concert on March 3. He said that “Octubafest” would be back next fall.

“There will be tuba quartets and the full studio performing as a tuba and euphonium ensemble,” Carlson said. “The students have been working very hard to get this performance-ready, and we’re all very much looking forward to it.”

There are many different opportunities to see GVSU professors perform, many also bring in outside help from other artists. Professor Bill Ryan started a series called “Free Play,” which has brought a variety of contemporary artists to the GVSU community. Some past guests have been Loadbang, Akropolis and Latitude 49.

“I started the series in 2005,” Ryan said. “I bring in performers and composers that specialize in contemporary music so that they can share their music with the GVSU community. They have concerts, speak in classes and interact with our students in a variety of ways.”