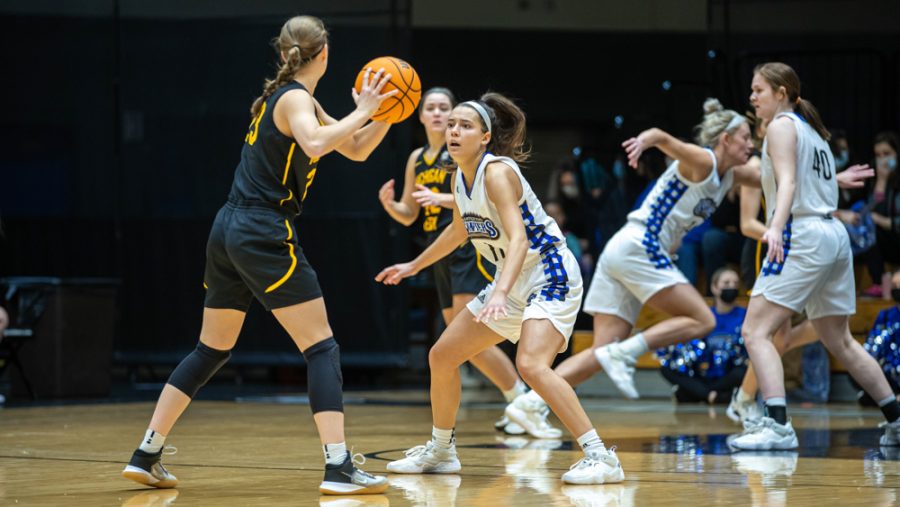 Despite the double-digit victory, the Lakers had their struggles early in the contest, falling behind the Huskies by as much as seven points in the middle of the second quarter. GVSU started to find their groove late in the quarter, as sophomore guard Ellie Droste hit a three-point shot to cut the Husky lead back down to four.

Heading into halftime, the Lakers trailed 26-29 but had built some momentum heading into the break

The second half was completely dominated by the Lakers and their defensive effort, only allowing nine points in the third quarter and seven in the fourth. It was evident that the Lakers were looking to force their way inside, only attempting four three-point attempts in the entire second half.

Droste continued to come through in a big way for her team when they needed her, converting an and-one attempt with 31 seconds remaining in the third quarter to give the Lakers a six-point lead.

“Once we got in the huddle, after the and-one layup, I told (GVSU) ‘we need to get a stop on defense,’ because we would either foul or get back cut,” Droste said. “It was like, anytime we would make progress they would come back down and score a layup or get something too easy.”

Once again on the ensuing Laker possession, Droste attacked the paint and made another layup to expand the GVSU lead to seven heading into the final quarter of play.

Sophomore forward Rylie Bisballe took over the fourth quarter, out-scoring the entire MTU team 8-7. The Lakers as a team outscored MTU 35-16 in the second half of play.

“We talked all along that we thought we were a solid team and we wanted to become a really good team, especially on the defensive end,” Williams said. “We can do all the drills we want, all the halftime speeches, but until they make the decision that they want to be great, or really good on the defensive end, it isn’t going to happen. I think they made that decision at halftime so that was good to see and I hope that can continue.”

Earlier in the week, the Lakers hosted Northern Michigan University (9-12) in what was also a low-scoring defensive battle. Despite struggling offensively, GVSU only trailed one time in the game, which came in the first two minutes.

“I thought defensively we were good, and I thought when we weren’t good, they missed shots,” Williams said. “It was a combination of both of those things where we gave them some easy looks, they just missed them.”

Although NMU never had another lead, they did come close, getting within six points multiple times in the final quarter of play.

A key part of that was Bisballe, who had a layup with 1:15 remaining in the game to give the Lakers an eight-point lead, followed by a block on the defensive end the next time down the court.

Senior guard Emily Spitzley would go on to hit two free throws with 10 seconds remaining to close out the game.

“I was just thinking that I’ve shot this free throw a million times in this exact same spot,” Spitley said. “In practice, I’ve been here four years so I just thought, ‘alright, we’re just going to put this one in and seal the game.’”

Again, helping lead the way for the Lakers was Bisballe, finishing with another double-double, scoring 14 points, grabbing 11 rebounds and adding three blocks on the defensive end. Spitzley finished with a team-high 16 points to go along with five rebounds, and three steals.

Bisballe said focusing on the team and following the game plan allowed her to find success in the consecutive home victories.

“I think just following the game plan, just doing whatever I could for my team (helped me find success); whether it was crashing, getting stops on defense, whatever they needed,” Bisballe said.

Looking ahead, the Lakers will make the short trip to downtown Grand Rapids on Feb. 17 to matchup against Davenport University (2-22), followed by a home game against Northwood University on Feb. 19.