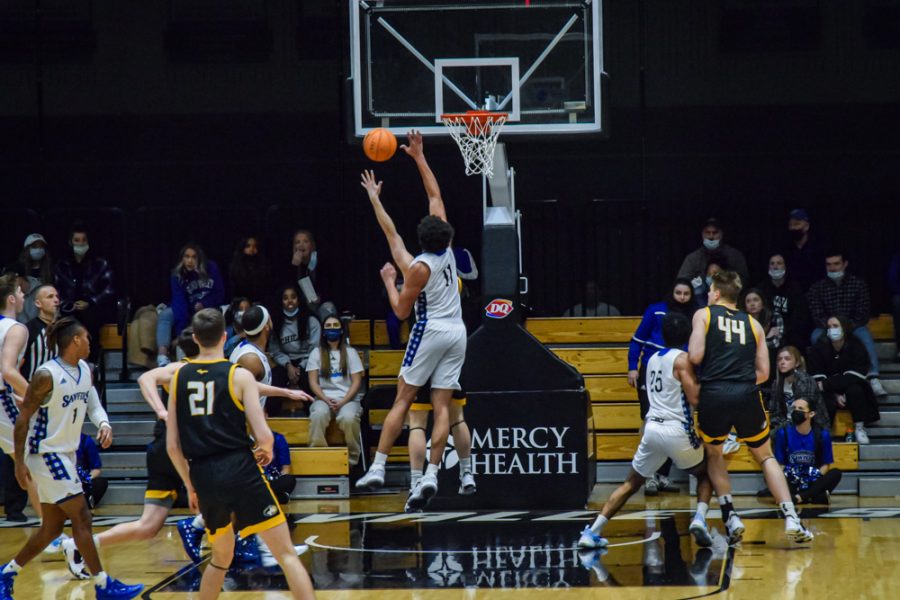 The Grand Valley State University (14-9) men’s basketball team played the Michigan Tech University Huskies (17-5) on Feb. 12 coming back from a three-game losing streak after their loss against the Wildcats on Feb. 10. The team’s commemorative Sawyers Day uniforms remembered the 1965 choice year for the school’s mascot, while the packed house lit up with energy to support their teams.

Earlier this season, the Lakers beat the Huskies 80-74, while their luck wasn’t quite panning out for the Lakers this time around. The Huskies now seven-game win-streak wrapped up this weekend’s events with the Laker’s loss, 67-75.

“This was kind of a heck of a game — kind of a tale of two halves,” said coach Ric Wesley. “I’ve got to give them (MTU) credit– they shot lights out in the first half, it seemed like they hit us from every different angle, so we could’ve easily folded, but I’m really proud of the effort our team gave in the second half. We probably played as hard in the second half as we’ve played all year.”

While the Huskies came out of the gates on fire with shooting, the Lakers were unable to gain the lead at any point in the first half. Senior forwards Jake Van Tubbergen and Christian Negron finished the first half with eight and 12 points with the help of senior guard Jordan Harris’ five, for a total of 25 points compared to MTU’s 44.

Perhaps as a preview of the second half, Negron dunked the ball just before time ran out in the first, setting the Fieldhouse Arena up for a raging second half.

“In the first half they (MTU) were making a ton, so we kind of got out of rhythm,” Negron said. “In the second half, I think we just kind of did the same thing we were doing and just trusted our shots.”

Coming in with new momentum and energy in the second half, Van Tubbergen kicked off the scoring with a few made jumpers and rebounds.

The Lakers slowly started chipping away at the deficit in the second half to get the crowd going with a made layup by junior guard Ja’Kavien Lewis from an offensive rebound by Harris, putting the score at 44-55.

Another made three-pointer by senior guard Issac Gassman put a few points up on the board with the rest of his team cutting the deficit down to just six points with 6:09 left in regulation.

“We’ve had a couple tough weeks,” Wesley said. “Our team has stayed together and they certainly came out today and showed that we’re still a team that can be reckoned with.”

With the end of the game so close for the Lakers, a few fouls and good free throws on both teams put the Lakers back into a rut. Two timeouts in the last minute of play weren’t enough to pick back up where the second half started, and the Huskies took the game 67-75.

“We didn’t exactly play how we wanted to play in the first half but, obviously, we didn’t quit,” Negron said. “We’ll go through stretches where we’re playing really well and stretches where we’re not playing really well, so we just kind of have to carry that momentum of having that mindset of playing a full 40-minute game the rest of the way. That’s what it’s going to take since the league is so competitive and our margin for error is so little.”

Despite the fact that the Lakers were unable to recover from their losing streak, they still have four more games left in the regular season before the GLIAC Conference Championships begin in March. They didn’t walk away from this week with all bad news, either.

“Guys were talking to each other a lot today,” Negron said. “Talking on defense, talking on the bench; (what matters is) just that communication and that decisiveness and trusting each other at this point. It’s us against the world, so we just have to keep pushing.”

The Lakers will take on Davenport University Feb. 17 and then Northwood University on Feb. 19 for their last home game of the season.