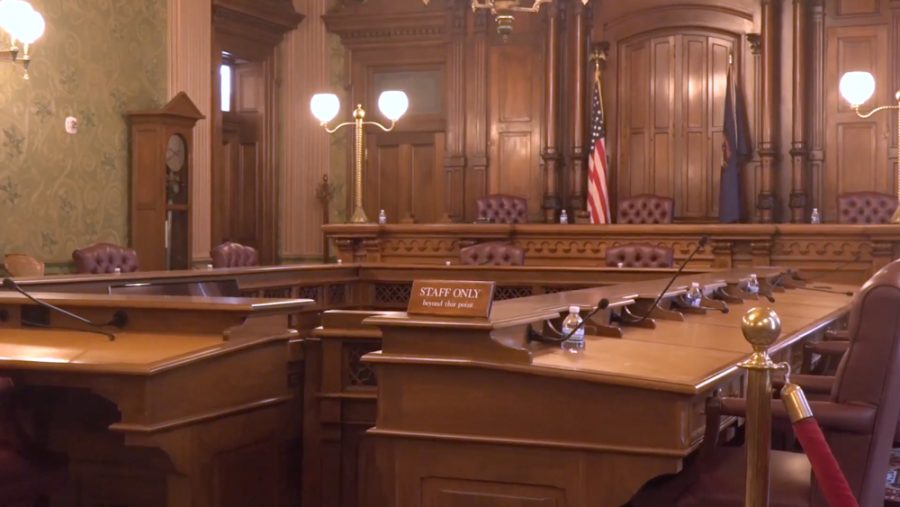 Discussions are now underway among lawmakers in Lansing over next year’s state budget– one that could include millions in additional funding to Grand Valley State University.

Under a new $74.1 billion budget proposal offered by Governor Gretchen Whitmer, public colleges and universities like GVSU are slated to receive boosts to operational and other campus-wide funds.

The proposal, intended to outline the state government’s spending plan for fiscal year 2023, calls for a 10% increase in operations funding for community colleges and universities. 5% of the increase will be ongoing, while the other 5% will be a one-time increase.

For GVSU alone, the proposal calls for over $12 million in additional funds compared to last year’s budget.

The 16.3% increase is the second-highest of any university in the state behind only Oakland University.

Working with a focus on economic and community development in the GVSU political science department, professor Michelle Miller-Adams said she sees the proposal’s increase to higher education funding as a key principle.

“When times are tough in state budgets it’s usually higher education that bears a lot of the brunt of that,” Miller-Adams said. “The reason is simply that higher education has another option for getting money, and that is called tuition.”

This year, however, state resources have grown with federal relief money from sources like COVID-19 funding and last November’s Infrastructure Investment and Jobs Act.

Governor Whitmer has claimed that, even with $1.9 billion in additional gross spending compared to the previous year’s budget, it will not raise taxes.

“Soon, I’ll introduce a school aid budget that will mark the biggest state education funding increase in more than 20 years without raising taxes,” Whitmer said during this year’s State of the State address.

Miller-Adams said she hopes that, should the university funding in the proposal remain intact, GVSU may consider halting its decades-long precedent of raising tuition to cover costs.

“I guess the most important thing that Grand Valley could do with it is keep tuition increases down and I hope that’s what GVSU would do,” Miller-Adams said.

However, the governor’s proposal is not a final plan. In order for a state budget to take effect, an agreement on a final deal is also required from the state legislature.

On the topic of allocations to universities for electric vehicle investment, Senator Jim Runestad, R-White Lake, commented on what he felt was too much funding to universities in the proposal.

“It seems like that is an unnecessary expense,” Runestad said. “These universities – they get a tremendous amount of money from the state subsidies from us.”

Others, like Senator Roger Victory, R-Hudsonville, were open to the proposal’s education funding amidst the background of previous underinvestment. Victory said that while Michigan has been known for quality higher education in the past, it has diminished over time as funding decreased.

“As time goes along, with some disinvestment, we’ve seen some erosion there,” Victory said.

Investment in higher education, Victory said, was important in ensuring opportunities for graduates in the state.

“I do agree with the administration on highlighting some investment in our universities,” Victory said. “I think it was kind of brought on testimony here today that when we talk about development, attracting industry throughout the state, that we can be collaborative through our universities and the private sector.”

At the same time, Victory said he believes that the unnecessary spending to which Runestad referred is to be expected.

“Any proposal that comes up, there’s always some splashing around because that’s the initial start,” Victory said.

Victory said that although funding to universities like GVSU is needed, it’s the legislature’s job to allocate and vet the proposal responsibly.

“These are dollars that (taxpayers) sent to us here in Lansing and we’ve got to be very respectful of those and make sure we get a good dividend for them in return,” Victory said.

However, Miller-Adams is optimistic about the survival of elements in the governor’s proposal that bring additional funding to GVSU.

“Even people who don’t want to raise taxes to fund education, there are very, very strong constituencies for funding K-12 education and for funding higher education and it’s a politically very popular thing to do,” Miller-Adams said. “There are certainly Republicans who are going to support parts of this budget and I’m hopeful that they’ll be able to get some of this stuff to happen because there’s the money in the bank.”

With the next fiscal year set to begin on Oct. 1, negotiations between the legislature and the Governor’s Office will continue to play out in the coming months, revealing GVSU’s final funding.