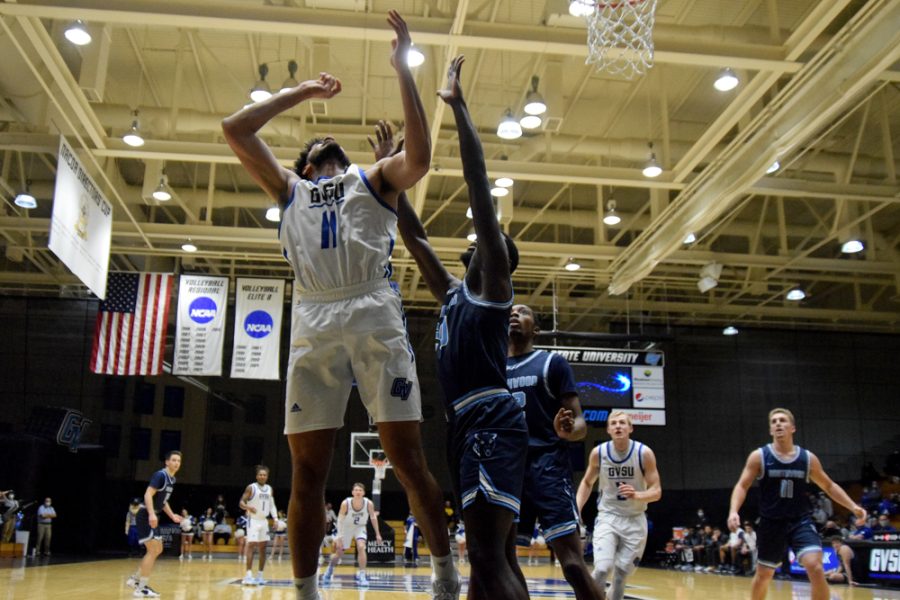 The Grand Valley State University (16-9) men’s basketball team defeated the Northwood University Timberwolves with an outstanding 82-58 victory on Feb. 19 at the GVSU Fieldhouse Arena on Senior Night. The Lakers improved to 10-8 in GLIAC play for their final regular-season game.

“Glad we had a good performance,” said coach Ric Wesley. “It’s Senior Day and it’s always a special day. It can be a little emotional at times and overwhelming with six seniors this year that have had so much impact while they’ve been here. It was really important we came out and honor them by having a good performance and for the most part, I think we did.”

Both teams traded baskets through 8:15 in the first half as neither team had a lead larger than four. GVSU got a little breathing room with 8:13 remaining after a made jumper by Grazulis. Northwood made it a one-point game when De’Airrus Ware made a three-pointer, 24-25. The Timberwolves took the lead with 6:31 left in the half — their first since the 6:28 mark.

The Lakers went up by as many as seven with 2:24 remaining, the largest lead of the game after senior guard Issac Gassman got a fastbreak basket. The Timberwolves basket cut the deficit to five, but it was the only basket allowed as the Lakers closed the half out on a 10-2 run.

“Well, in the first half, I didn’t think our offense was there all the way,” Wesley said. “Right out of the gates, we started out okay. We had a couple fumbles, bumbles early and we were up 7-2. We should’ve been up 12-2 or 14-2 and sure enough, we allowed them to inch back in there. For a period of time, I just didn’t think we shared the ball very well. We were too antsy and didn’t finish well around the bucket.”

Northwood came out and scored their first two baskets in the start of the second half, cutting the Laker lead to three with 18:42 left. The lead was then extended to as many as 11 with 14:38 remaining after Gassman’s three-point make. The Lakers went on a 11-2 run to go up as many as 17 points, the largest lead of the game.

With 11:52 remaining, the seniors started to have a little fun in the game when Lewis threw an alley-oop pass off the backboard to Negron for a slam dunk.

“It’s crazy because, JK (Ja’Kavien) and I, when he first got here, we developed a chemistry throwing lobs and in the game, it just never came into fruition,” Negron said. “So then finally we got an opportunity and I saw JK at the front court. I was at the free throw and my eyes just bolted wide open and at half court; I was calling to JK backboard and he took one look back, took another dribble and then threw it.”

The Lakers went up as many as 23 with 10:28 remaining in the game. GVSU would secure the victory thanks to a great defensive second half and got the 82-58 victory over Northwood.

“In the second half, our defense was a lot better,” Wesley said. “Because it was better, it created some easier offensive opportunities for us.”