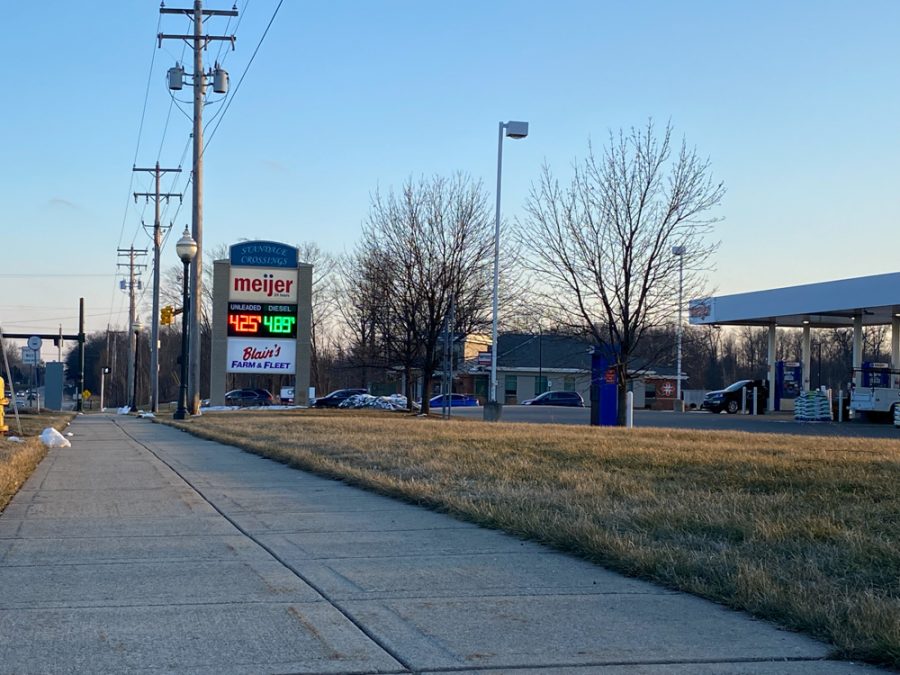 Propelled by international and corporate sanctions on Russia over its invasion of Ukraine, prices at the gas pump began to rise as countries and businesses cut ties with Russia’s vast oil supply.

The impact has been apparent in areas surrounding GVSU, with some pumps in West Michigan seeing increases of up to 40 cents in less than 48 hours.

In Allendale, GVSU students already under typical collegiate financial pressures have begun to feel the added strain as prices at surrounding gas stations rose to $4.25 per gallon late last week.

Living an hour and a half from campus, GVSU junior Makenna Fall said the new cost of getting to school is already beginning to add up.

“The increase of gas (prices) is making it harder for me to be able to make the trip up to (Grand Rapids) and back,” Fall said. “I work a job, where I get paid every other week and currently I’ve been struggling to get gas because what used to only be 15 or 20 bucks to fill up my tank is now 25 or 30 dollars.”

The situation has caused state lawmakers to consider what can be done to lower gas and energy prices statewide until the global market regains its balance.

Joining multiple governors and lawmakers across the nation, Governor Gretchen Whitmer has begun calling for a temporary suspension of the federal gas tax that constitutes about 18 cents of the pump price.

“Today, I joined with some fellow governors and called on our congressional leaders to suspend the 18.4-cent per gallon gas tax through the end of this year,” Whitmer said in a video released on March 8. “Suspending the federal gas tax could save Michiganders hundreds of dollars at the pump through 2022 and help us pay bills and put food on our tables.”

But as the state legislature moves to halt Michigan’s own 27-cent gas tax, the governor has struck a different tone.

In a bill passed by the Michigan House of Representatives on March 9, lawmakers are seeking to suspend the state gas tax for the next six months.

While the Republican-led proposal is expected to pass the senate next week, Whitmer expressed in a press conference last week her reservations about the bill and hesitancy to sign it if passed by the legislature.

“(The bill) won’t live up to any of those things I just said, so you can draw your own conclusions,” Whitmer said in a video of the press conference obtained by the Detroit Free Press.

While the state government moves to suspend gas taxes, other lawmakers are advocating for additional solutions.

Chairing the Michigan Senate’s Energy and Technology Committee, Sen. Dan Lauwers (R-Brockway Township) believes that the state government should focus on solidifying its support around Michigan’s other sources of crude oil (petroleum) and energy materials.

“Today, we’re not really producing any less petroleum than we did a month ago or two weeks ago when the price was half of what it is today,” Lauwers said. “It’s all the expectation that it’s going to cost more.”

While his committee has explored long-term fuel and energy prospects like the wider integration of hydrogen-powered vehicles, Lauwers also sees opportunity for short-term, immediate solutions to soaring prices.

One of these solutions, Lauwers said, is full support for Enbridge Line 5, a pair of pipelines running through the Straits of Mackinac that transport crude oil and other fuel supplies among multiple states and Canada.

“If the governor and attorney general were to say, ‘Hey, we’re going to step out of the way of the Line 5 tunnel and we’re going to put all of our efforts toward making that happen as soon as possible,’ that would send the opposite message that our energy sources are secure for the future, we’re doing our part to make that and it’d have an immediate effect on what petroleum costs today,” Lauwers said.

Concerns from environmental experts and activists over a potential rupture of oil into the Great Lakes from the nearly 70-year-old pipelines have led Governor Whitmer and Attorney General Dana Nessel to oppose Line 5’s operations.

In order to calm spiking gas and energy prices for Michiganders and GVSU residents, Lauwers said stepping aside would go far in satisfying fuel and energy demands and leveling out prices.

“They could make an unequivocal statement from the attorney general and the governor’s office that we’re going to take anything that’s preventing the Line 5 tunnel from being manufactured, we’re going to step out of the way and we’re going to put our full efforts into seeing that move forward,” Lauwers said. “That would send a huge signal to the industry.”

Going forward, local gas prices are likely to hinge on whether state lawmakers can negotiate a solution and stave off further price hikes.