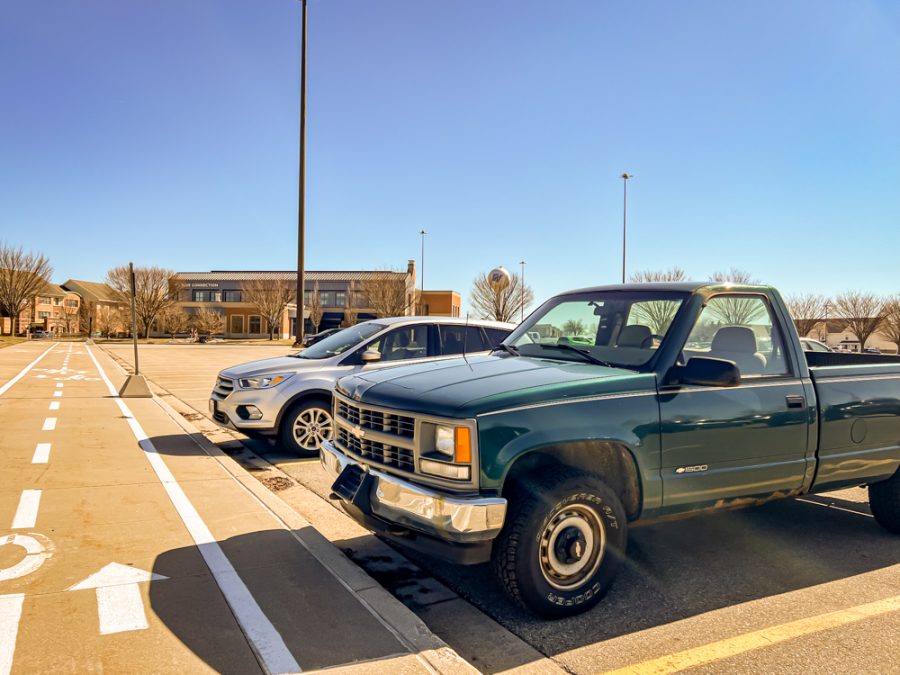 Grand Valley State University students – like the majority of college students in the U.S. – have tight budgets. Students have to manage paying for tuition, rent and food while earning their degrees for their future careers while also considering expensive parking costs into their budgets.

But at GVSU, parking makes a bigger dent on student finances than any other university in the state of Michigan.

Out of all the public universities in the state, GVSU has the most expensive commuter parking permit, according to an exclusive Lanthorn analysis of parking data it compiled. For off-campus commuters, GVSU students pay $240 a semester for a student commuter permit. There is another, cheaper alternative for commuting students – a Lot J permit that costs just $105 a semester. However, this cheaper permit is still more expensive than the majority of other university’s permits. Students who live on-campus in Allendale pay $210 a semester to keep their cars on campus.

CMU permit-price information was received via CMU Parking Services. Available data from EMU is only from 2016.

What some students consider to be eye-popping prices have continued to climb upward since 2015 – a period during which student enrollment has dropped by more than 10%, according to an analysis of GVSU parking and student enrollment data. Along with the violations, the permits have netted GVSU nearly $4.5 million from Sept. 1, 2021 to March 3, 2022, according to data the Lanthorn secured through a public records request.

“Parking permit revenue goes towards payroll of parking staff, general lot/ramp maintenance, and capital projects such as reconstruction of existing and construction of new lots/ramps,” said Chris Swank, GVSU Manager of Parking, Transportation and Services. “It also goes towards debt service for parking projects which can include capital improvements, ramp construction, and repaving. A portion of the revenue also goes to the long-term parking reserve to fund future parking projects”

But some students already grappling with taking out thousands of dollars of loans questioned the university’s prices and parking haul.

Swank explained that the university’s Board of Trustees generally sets parking rates in June.

“How this has bearing on students has always been taken into consideration – be it for any kind of fees, parking fees, tuition, room and board – those all are taken into account,” Cardenas said. “I think that’s paramount in our minds when we make decisions. But obviously with inflation, cost increase and wages increase, we have to take that into account as well. So, it’s always the sustainability of the university and making sure it’s financially sustainable in the future, but we also want to make sure that we’re not putting that burden on the students. We’re trying to find ways to make sure that it’s less of a burden for them going forward.”

PARKING PRICES UP, STUDENT ENROLLMENT DOWN 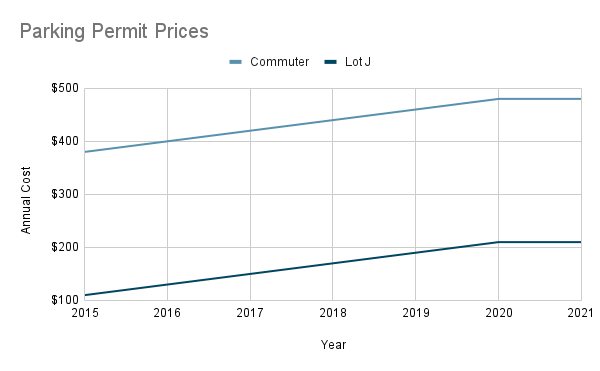 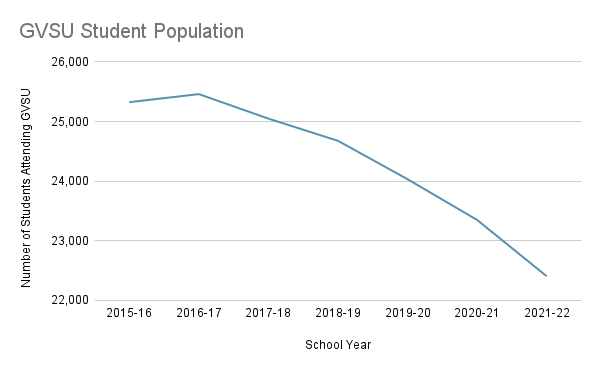 Data was acquired from GVSU’s Parking Services and “About Us” webpages.  Previous years’ information was acquired using the Wayback Machine.

GVSU has steadily increased the prices of their parking permits during the past seven years. In 2015, a student commuter pass cost students $380 annually. In 2022, that price is now $480. Every lot pass has increased by $20 a year since 2015 – excluding 2020 where prices remained the same. Throughout the past seven academic years, the student commuter permit price has increased by 26.3%.

Some students took issue with the continued price hikes during a time of decreased enrollment.

THE PERMIT AND VIOLATIONS HAUL

Some GVSU students expressed surprise at how much revenue the university has received from Allendale parking alone.

According to GVSU Parking Services, there are approximately 7,400 parking spaces on GVSU’s Allendale campus. As of March 3, each parking space has made GVSU $607.46 – not including how many of these spaces are restricted for just faculty/staff who park for free. Excluding holidays and weekends, every parking space on campus generates $5.42 in revenue each day.

From the beginning of the fall 2021 semester to March 3, the date at which the public records request was fulfilled, there had been 112 days of class – the majority of which are held in the in-person format. During those 112 days, GVSU made an average of $40,135.77 per day from students.

“I got paid minimum wage,” said former Parking Services student employee and current GVSU student Laura Andres. “Wow, ($40,135.77) is a lot worse than what I thought.”

Despite the decline of enrollment at GVSU over the past five years, GVSU students have still experienced difficulties finding parking spaces. Several students who have received parking tickets state that the violation was due to not having available spots on Allendale’s campus. Due to the high volume of parking passes sold, some student drivers are forced to park in lots that their parking permit isn’t registered for.

During the winter 2022 semester, GVSU sold 9,146 student-parking permits. That is almost 2,000 more passes than parking spaces on GVSU’s Allendale campus. GVSU’s administration says the high volume of parking permits is feasible due to a survey that Parking Services conducts every year.

“A week-long parking survey is done each fall to evaluate parking demand,” Swank said. “It has shown that even though more students are driving to the Allendale and Pew campuses, we have enough parking to accommodate them. The Health Campus didn’t have enough parking. As a result, we partnered with Spectrum Health to construct a new shared ramp on the Health Campus consisting of 600 new spaces to be used by GVSU students, faculty, and staff.”

However, some students feel that this week-long survey doesn’t accurately reflect the student parking demand.

“The available parking for students fills up very quickly,” Analise Robinson, a student at GVSU said. “If I try to find a spot on campus anytime after noon, I drive around in the lots and can’t find a spot or I end up having to park very far from the building my class is in. The prices of parking passes are very expensive, yet you might not be able to find a spot.”

An anonymous survey of 97 people found that more than half of the respondents received at least one parking violation.

Naturally, some GVSU students that haven’t purchased a parking permit still park on campus. They may try to park in a lot for a short period of time while doing something on campus – buying a book at the Laker Store, stopping by a professor’s office during office hours or going to the library to print a paper. Several students have stories of when they stopped by campus and received a ticket for not having a permit.

“I’m an art student,” said GVSU student Kylie Zito. “I’m a photography major so I go to Calder a lot. It’s really cold in the winter and I’m just not a fan of parking all the way in (student parking). So sometimes I’ll park in this Calder and that’s what they get me for.”

More than half of the respondents didn’t purchase a permit, the survey found. In some cases, this decision was the outcome of a deliberate calculation to pay whatever tickets they accumulated rather than the $240 permit price.

“I didn’t buy one this semester and decided I would just go as long as I could before getting too many tickets,” said one anonymous-survey responder. “So far, I have gotten four tickets totaling $140 which is of course $100 cheaper than the actual pass.”

GVSU has similar violation prices as other public universities in Michigan. 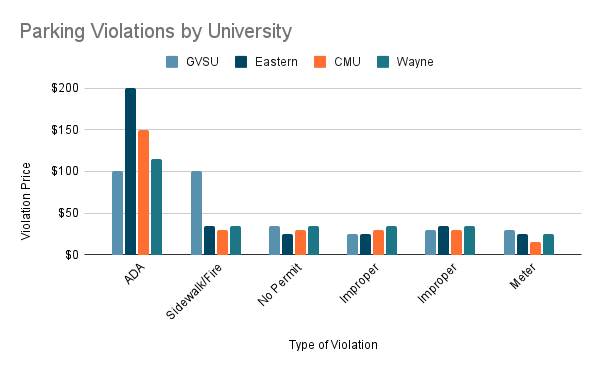 “I actually got ticketed twice in three days,” said GVSU student Kendall Robertson. “I parked where I wasn’t supposed to. I was parked for my practice. It was a convenient location to get to my practice and then it wasn’t convenient for parking.”

This is the first in a series of articles about parking-related issues.