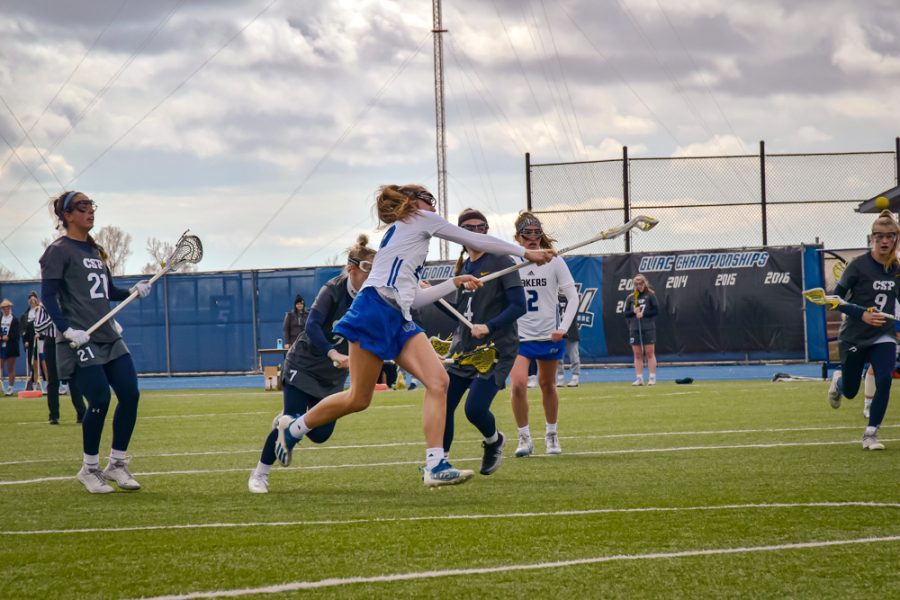 Stepping out to play in the always unpredictable Michigan spring weather, GVSU didn’t let the wind and snow prevent them from getting off to a hot start. Junior midfielder Molly Bursinger played a major role in the Lakers’ early success as she scored a goal in the first minute of action. Bursinger continued her offensive attack as she scored three more goals before the end of the quarter. Junior attacker Kate DeYoung and freshman midfielder Ashleigh Rothe also scored goals of their own. With one goal from Concordia, GVSU led 6-1 at the end of the first quarter.

“I’ve been struggling a little bit in the past few games at putting the ball in the net,” Bursinger said. “Today I was really focused on moving the goalie and then hitting the corners.”

“They face guarded Sophie Conroy and she had a great last game against Notre Dame College,” said coach Mackenzie Lawler. “We talk a lot offensively about being really balanced, so when they try to take away Sophie (Conroy) early, Molly (Bursinger) really stepped up and made them pay for it and I think that’s the benefit of us playing a team style of offense.”

In the second quarter, GVSU continued to build on their lead. Rothe and DeYoung added to their offensive production as DeYoung scored two more goals while Rothe scored one. Conroy also found the back of the net twice with her second goal coming with only two seconds left on the clock prior to halftime. At the half, the Lakers led 11-4.

When the Lakers returned to the field after halftime, new rainfall added to the already cold and windy weather creating an even more difficult playing field.

“I think (the weather) affected our offensive schemes,” Lawler said. “We went a little more to a driving offense instead of the pick-and-roll we ran in the first half, just because of the weather affecting our sticks. We had talked about that in the pregame talk and knew that was something that could happen.”

This weather did lead to a slight drop in offense for the Lakers but they never let their lead slip away. In the third quarter sophomore attacker Maddy Champagne opened the quarter with a goal. Later in the quarter Conroy and Rothe each added to their goal total. With no goals from Concordia, the Lakers left the quarter up 14-4.

The fourth quarter played out very similar to the third. The Lakers put up three more goals as Bursinger, Champagne and freshmen midfielder Zoe Ziegler each scored. After a late goal from Concordia, the Lakers left with a 17-5 victory.

Throughout this game, GVSU saw offensive production from a handful of players, including four hat tricks. Bursinger left with five goals while Conroy, Rothe and DeYoung each had three. For Rothe, this was a stand-out performance as this was her first hat trick as a Laker.

“It was pretty big,” Rothe said. “I think this was the first game that actually clicked. Having that under my belt is really securing for me. It was just really exciting to see everyone do well, and I did well.”

Moving into GLIAC play from now on, the team looks to maintain their consistency this season.

“I think every team in the GLIAC will be competitive,” Lawler said. “(Concordia) has put some great games together this year, Northern (Michigan) is off to their best start, Davenport’s ranked in the top 25. It’s really important that we just set the tone of what level of lacrosse that we want to play all throughout GLIACs.”