GV Art Gallery hosts third installment of “On The Wall” 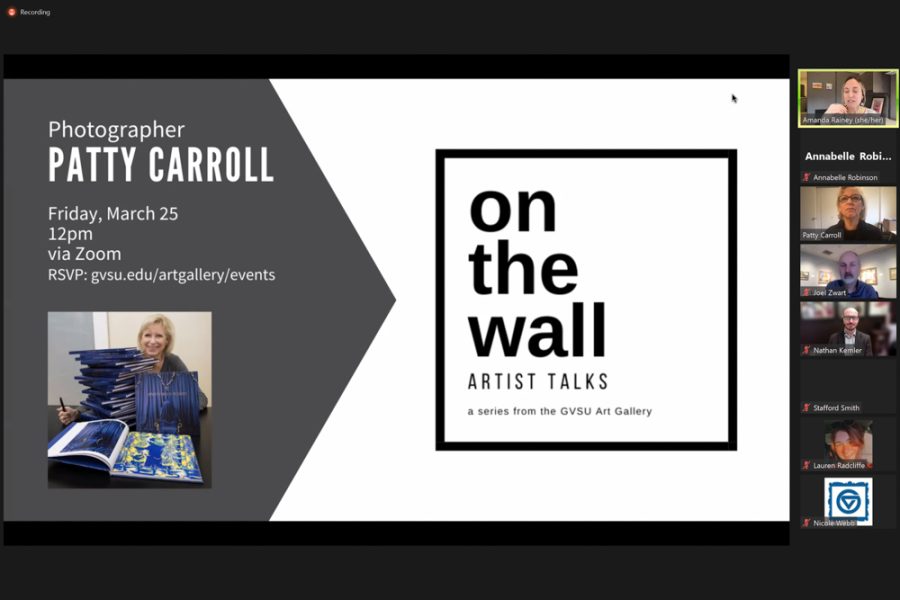 The Grand Valley Art Gallery hosted its third installment in the “On The Wall” artists-talk series.

This time around, the Art Gallery welcomed accomplished photographer Patty Carroll to discuss her work and how the ever-changing roles of women in domestic settings influence her creative process.

“We recently acquired over 20 of Patty’s photographs from her series titled “Anonymous Women,” and installed two on campus: one in the second floor computer lab in Manitou Hall and another in the Center for Women’s and Gender Equity in the Kirkhof Center,” Rainey said. “We invited Patty to talk about her work because it’s new to campus. We also wanted to hear from Patty because her work is visually very engaging, it’s super bright and colorful and her subject matter is a fun combination of clearly identifiable objects in strange arrangements that hint at the role of women in society.”

The talk focused on Carroll’s “Anonymous Women” series, which addresses women and their complicated relationships with domesticity. The series consists of staged installations, where the female subject is camouflaged in domestic objects to create a dark game of hide-and-seek for viewers.

According to Carroll, the project started when she moved to Britain in the 1990s. She said that she was inspired by the change of pace in what she was photographing the interiors of homes in Britain. Carroll said it got her thinking more about domestic life and its connection to women.

“Anonymous Women” started with a single photograph of a woman set against a black background, sporting red lipstick and a gold cloth that covered her face. Carroll said the choice was prompted by her newly-gained anonymity, which came as a result of moving to a new country.

“Suddenly I was in a place where people didn’t know me as a teacher, or a photographer or in any professional way aside from ‘Mrs. Jones’,” Carroll said. “I was always being seen through my domestic status. I started thinking about how ‘housewife’ became a name and women being identified only through their domestic status.”

An interesting aspect of the series that Carroll shared was the collection of short videos using the photographs from “Anonymous Women.” Carroll said she wanted to see her photos move in order to make them slightly more humorous.

One of the most striking images that Carroll shared from “Anonymous Women” was one featuring a woman seated and covered in tan-colored drapes holding a serving tray. Carroll said that this was to reiterate the theme of women and domestic life.

As the series progresses, the pictures get more and more elaborate with their wild use of color, amount of objects and the blending in of the female model. Carroll said the camouflaging technique was done to represent women being seen as the invisible keepers and servers in the home.

A bold and provocative series, “Anonymous Women” takes a look at women in the home and how they’ve been silenced and invisible for far too long. Carroll’s work can be found in the second level computer lab in Manitou Hall and the Center for Women’s and Gender Equity.