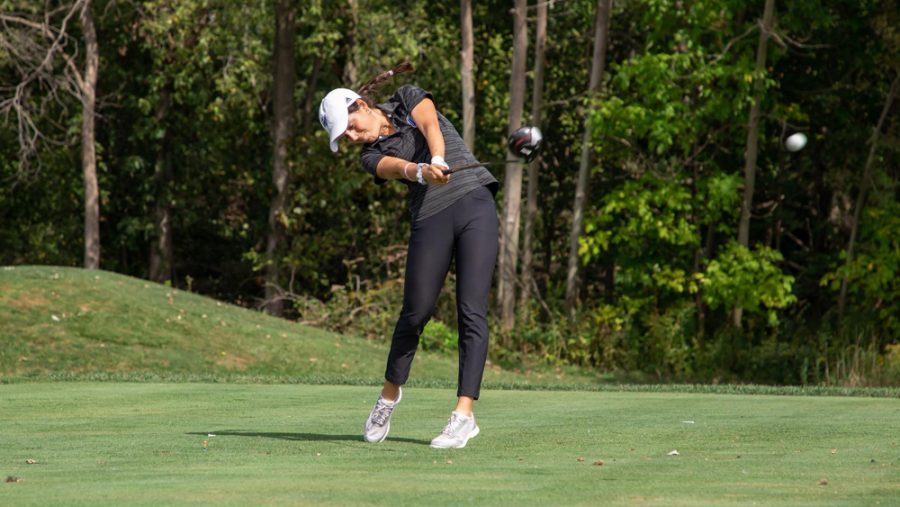 “The two teams that beat us are ranked top 10 in the country,” said coach Rebecca Mailloux. “As the rankings would say, we finished where we should’ve. It’s always nice to take down Findlay, but this week wasn’t the week for us. We played against two really good teams that played some really good golf this week.”

After the first day of competition on Monday, the Lakers ended with a score of +35 (611:303,308). Freshman Olivia Stoll lead the way in 13th place after notching four birdies in the second round, giving her a finishing day total of seven-over-par (151). Freshman Megan Miron recorded her first eagle of the season on a par-5, 456-yard fifth hole in the second round. Miron finished the day with a score of eight-over-par (152).

Freshman Julia Sanchez was tied for 17th carding (+9) and recorded a birdie, giving her the team-lead with five. In the individual competition, sophomore Kay Zubkus finished day one in ninth place with a carding of 150 (+6). Freshman Martina Biancuzzo tied for 64th with a carding of 167 (+23).

“It was really fun; (there) just weren’t any expectations, (we were) just having fun,” Sanchez said. “I think we played really well. I think we put our all out there and did the best we could.”

The GVSU women’s golf team stayed put and received third place after Tuesday’s rounds. Both Sanchez and Miron moved up in the leaderboard finishing tied for ninth at nine-over-par (225). The freshman teammates both recorded three birdies in the third round to stay within the top 10.

Stoll tied for 17th carding with a 229 (+13). Stoll tallied five birdies in the third but shot a five-over at the 12th hole on a par-3. Junior Arna Kristjansdottir finished 19th carding with a 231 (+15) and freshman Paula Badino completed the team score for 35th, scoring 23-over par (239). Zubkus moved up one spot on day two after going even-par on 16 holes, ending the day in eighth place scoring eight-over-par (224).

“Today (Tuesday) was a definitely a big improvement from yesterday’s performance,” Mailloux said. “Yesterday was a long day and didn’t start out in the first round how the girls were expecting. 36 holes in one day quickly turns into a long day. Tough to rebound, but today’s performance was really good. At one point on the front nine, we were eight under.”

The Lakers women golf team will next tee off at the WT Desert Invite in Tucson, Arizona at The Lodge at Ventana Canyon golf course on April 4-5 hosted by West Texas A&M.