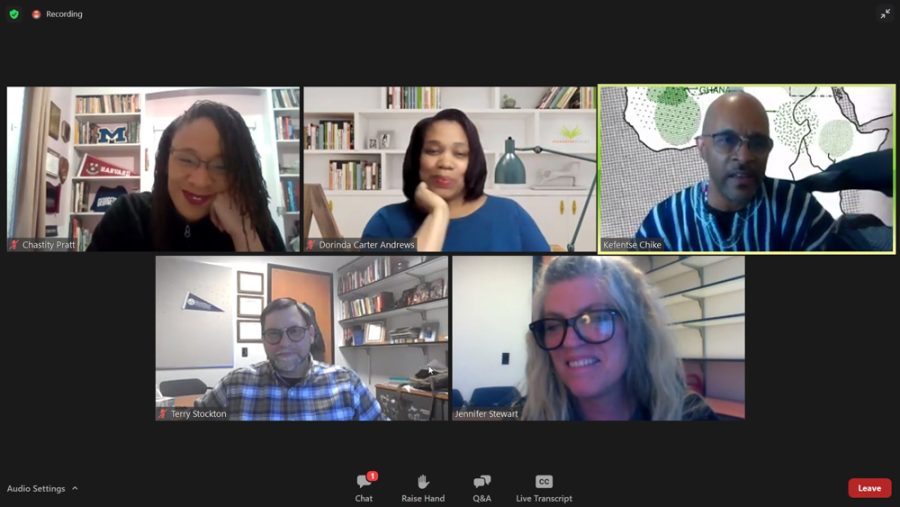 On March 31, Grand Valley State University held its fifth annual Film & Speakers Series. The event was hosted by the Educational Foundations faculty of the College of Education and Community Innovation. Speakers from various educational backgrounds and institutions were invited to share their opinions about Black-history education.

In the past few years, these events have created an environment where discussion of “controversial” topics often leads to deeper understanding. These topics have included school violence, civil discourse and the criminalization of Black women. But this year’s event was focused on Critical Race Theory (CRT) and the far-right’s recent attempt to keep the language and history of race out of schools.

“We wanted to contribute something that would be beneficial, informative and would strike a conversation between different individuals,” said professor and co-leader of the event Chasity Bailey-Fakhoury.

CRT has become a heavily-discussed and politically-charged topic in recent years. Critics have used CRT as an umbrella-term for talking about race in the classroom. Legislation against CRT has been introduced and even passed in certain states.

Although Michigan hasn’t passed anti-CRT legislation, other states including Tennessee, Georgia and Florida have successfully passed restrictions on what teachers are allowed to teach in their classrooms. These policies target topics like race, sexual orientation and climate change.

Professor Dorinda Carter Andrews, chair of the Department of Teacher Education at Michigan State University, was invited to speak on her expertise and research findings about CRT in the classroom. Part of her research is focused on educational equity.

Journalist Chastity Pratt also spoke at the event. Pratt shared her accomplishments and observations as an award-winning journalist and instructor at Harvard University. She has spent the majority of her career covering issues within the field of education, such as what she calls the “miseducation of Michigan.”

According to Pratt’s research, Michigan students tend to have below-average test scores when in social studies. Pratt said she’s afraid that anti-CRT legislation could water that knowledge down even more. Pratt dives deeper into this topic in her “Bridge Michigan” article titled “The miseducation of Michigan: How state fails kids in black history.”

“This is a national movement that they see when it comes to their fields and that are targeting history and anti-history bills that are being currently created,” Bailey-Fakhoury said. “She helped us conceptualize that movement.”

Kefense Chike, Wayne State University professor of African-American Studies, spoke about the cyclical aspects of this movement. He warned the audience about pushback against CRT, saying that it was a manufactured crisis. Chike said advancements made in 2020 with the multiracial and multigenerational movement of Black Lives Matter are not talked about anymore, proving the cyclical nature of these social advancements.

“These anti-CRT bills and anti-history bills are political movements that are funded and are used as political issues so we want voters, citizens, students and the community to be educated,” Bailey-Fakhoury said.

With these conversations featuring experts in their fields, GVSU hopes for future educators to learn important facts about this landmark moment in the history of education. Michigan teachers’ ability to teach certain aspects of Black history could be undermined by legislation that’s currently sitting in the Michigan House.

Students interested in this issue and want to make their voices heard are encouraged by the College of Education and Community to contact their state representatives, given that the students are Michigan residents. Public commentary opportunities will also be available in the future, which will allow anyone to share their experiences and opinions about this legislation.

“CRT has been blamed for reverse racism and we should be conscious of any teachings that bring any harm to any person’s culture, religion or creed,” said GVSU student Elaina Monroe. “Equity and inclusion should be a fundamental priority through every aspect of life.”

Although GVSU does not have any upcoming events concerning critical race theory, state Sen. Erica Geiss and state Rep. Mall Koleszar are organizing a forum for educators to work together and combat the push of anti-CRT education.