The Gravy train stops at GV 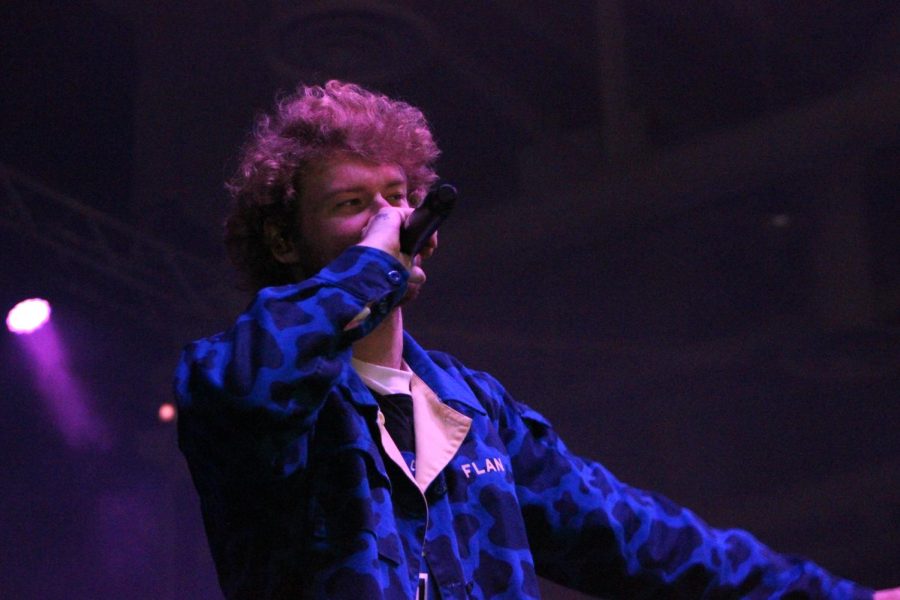 This past weekend the Campus Activities Board hosted rapper Yung Gravy for the annual spring concert. This was the first spring concert since Blackbear performed at Grand Valley State University in 2019.

Matthew Raymond Huri, also known as Yung Gravy, is a 26-year-old rapper from Minnesota. His career took off in 2017 with his song “Mr. Clean,” which samples “Mr. Sandman” by The Cordettes. Since its release, Yung Gravy’s song has gone platinum.

The concert was opened by DJ EDERZ, also known as Matthew Ednie, an emerging DJ from the Detroit area. He opened the set by mixing popular songs, giving them a house-party twist. He played both classic pop hits and new favorites, sampling Labrinth’s “Still Don’t Know My Name,” which was made popularized on “Euphoria.”

“The best part is the way I feel when I’m performing,” EDERZ said. “It’s awesome to make a bunch of people happy in a live setting, live music obviously brings everyone together. For everyone to be vibing and having a really good time to the same song in the same moment, it’s unexplainable really.”

EDERZ tries not to conform to one specific genre. He blends dubstep, house, trap and hip-hop turning each song into a unique experience. EDERZ has been DJ’ing for seven years, starting when he was a junior in high school. EDERZ is a Central Michigan University alumnus and often plays in Mt. Pleasant at venues such as Wayside and Encore The Nightclub. This is his first time playing a set on the west side of the state.

“My vision is always to bring fun, I always want to throw the crowd something that they might not expect to hear in a DJ set,” EDERZ said. “I want to play them music and mix things together that they’re not going to be able to hear on the radio or something that you’re only going to be able to hear at a live show. I don’t really want to combine to one genre specifically; if it gets a good reaction, I love it.”

EDERZ is a self-taught DJ and he advises anyone who is interested in learning to buy a mixing board and start practicing. He recalls the hardest part of starting out is getting the first paid gig, recalling that the most important thing is networking to get connections. He describes the moment of being told he was opening for Yung Gravy as “pure excitement.”

“I was thrilled, my buddies that play hockey actually put me onto him years back when he was still growing as a musician,” EDERZ said. “I loved his music back then, so for everything to come full circle is just amazing.”

After DJ EDERZ’s set, Yung Gravy’s DJ, DJ Tiiiiiiiiiip, came out to play to warm up the crowd for the rapper. He played classics like “Sweet Caroline,” “Party in the USA” and “Burning Up” to get the crowd ready.

Throughout his other shows, Yung Gravy often throws out items to the crowd. During this show, he stopped the show to throw out signed Lunchables and water bottles. One audience member held up their prosthetic leg, getting the rapper’s attention and receiving a Lunchable.

Unlike previous years, CAB didn’t send out an email to students to gauge who they would want to see perform at the spring concert. Erin Westberg, Director of Live Music, was in charge of finding an artist that would fit best. At Campus Life Night, CAB had a whiteboard where students could write down artists they wanted to see or genres or music they enjoy. After pooling them all together, Westberg noticed that people were interested in pop and party music.

“I figured out demographics, different genres and different age groups,” Westberg said. “I found that pop and party music was a big thing with people our age, so I went from the genre to looking at the list the agent provided for us, when I saw his name (Yung Gravy) we went from there.”

CAB has been planning this concert since last semester. The longest part was filling out the paperwork with the agencies and solidifying the contacts. After months of work, their efforts paid off.

Some of the CAB members have been a part of the group for all four years while at GVSU, so this experience made up for the previously canceled 2020 concert.

“I have a unique experience of being in CAB for four years but this is only the second spring concert we’ve had,” said CAB president Jay Chapa. “My first year I didn’t get a lot of the behind the scenes, but it’s been really cool to see how Erin has taken autonomy in this role and how they’ve found ways to listen to what the student body wanted and work with our advisors to make it all come together.”

While the organization of the event went smoothly, there were still some issues that CAB faced when putting together this event.

“It has been hard seeing students not be as receptive to some things,” Chapa said. “We definitely want to have a space where students feel comfortable sharing those feelings with us, but we’d like to hear maybe a bit more on why students are upset. We also think it’s a great opportunity to know if students are looking for something different or something more.”

Chapa said she wants students to share their feelings with CAB moving forward. For CAB, it was difficult to figure out the one artist that fits what everyone wants to see, but they feel like with Yung Gravy they achieved that as best as they could.

“I’m very excited and I’m very interested to see how it’ll go because the campus culture is so different,” Chapa said. “Not in a good or bad way, it just is different, and I’m very excited to see because I feel like the demographic and what we’ve heard people say as well as the people we’ve seen buy tickets come from all sorts of areas on campus. So, I feel like it’ll be a unique event in terms of all sorts of people are going to come.”

Returning students who went to the Blackbear concert were happier with this concert. So the changes CAB made were well received by some.

“I think that Yung Gravy was a good selection for Grand Valley and what everyone likes,” said Holly Heathfield, a GVSU student. “I didn’t go to the Blackbear concert and I know a lot of other people didn’t go, so this made more sense to me.”

While many students had fun at the concert. there was some confusion about specific rules, like if masks were acquired at the event. Before the event, there were questions being asked on CAB’s Instagram asking if they were required.

“It was super fun, but I remember there being some confusion about whether or not we need masks, which was interesting that we didn’t need them for the concert but had to wear them in class,” Heathfield said. “It just doesn’t make sense because everyone is piled in on top of each other, but we need them in the classroom.”

CAB is recruiting new members for next year and their applications are currently open. Those who are a part of CAB have the opportunity to plan events like these, Chapa said.

With the spring concert having been canceled for a few years, CAB knew that students were excited for the event to come back, but they didn’t feel any pressure. Westberg said she felt all of the events flowed together nicely.

“I think something really awesome about this year is that we had the opportunity to start with a clean slate,” Chapa said. “The students that we have that are engaging with CAB are almost entirely different than they have been before. It’s not so much of a sense of pressure but an opportunity.”