GV Track and Field competes in the cold at Spartan Invitational 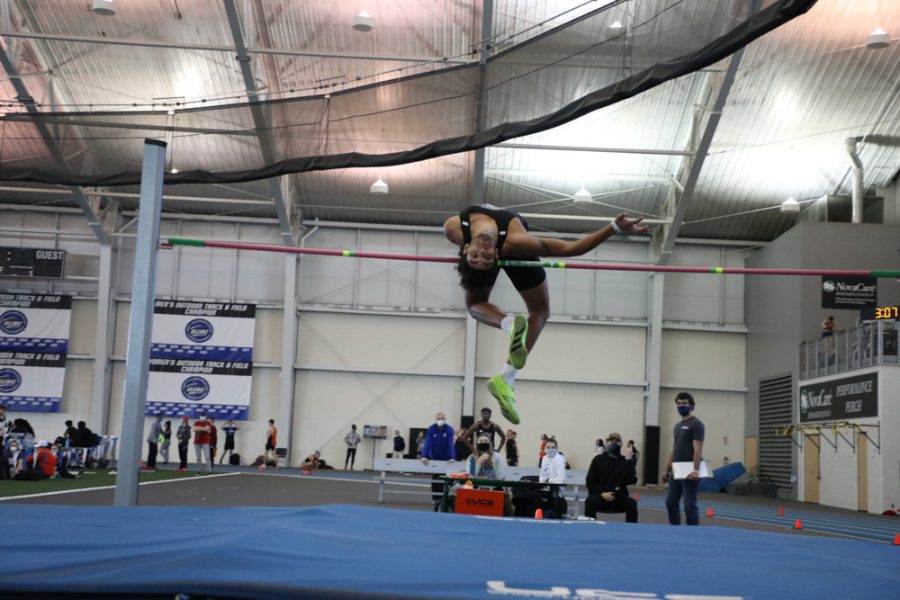 The Grand Valley State University men’s and women’s track and field teams traveled to East Lansing this past weekend to compete in the Spartan Invitational on April 1-2, coming away with several individual successes.

Despite the wet and cold weather, the events were highlighted by the men’s high jump first and second place finishes by sophomore Eli Kosiba at 2.11m and freshman Jonathan Rankins-James with 2.06m.

Due to the weather, Michigan State University officials moved the high jump indoors, which benefited Kosiba and Rankins-James’ performances greatly.

“I felt pretty good, pretty happy with how I jumped today,” Kosiba said. “It’s pretty difficult to transition into the groove of competing indoors versus being outdoors. This was the first time this season that the whole team was able to travel together and I think that helped bring a lot more energy to the team as a whole. This allowed us to not only motivate one another, but we were able to critique each other on things that maybe coach wouldn’t be able to see during the chaos of everything.”

Between both men’s and women’s teams, GVSU finished with 33 top-five placements, with Kosiba moving up to fourth overall in the NCAA DII rankings for the high jump.

Sophomores Jason Millis and Jacob DeBoer also paired up in first and second place for the 3000m steeplechase with Millis coming in first at 9.33.91 and DeBoer right behind him at 9.39.54. Sophomore Steven Harris secured first place in the 400m hurdles with a time of 54.40.

In individual events for the women’s team, Timia Robinson placed second in the 100m dash with a time of 12.81 and fifth in the 200m dash at 26.71 for two personal bests. Freshman Melia Williams followed Robinson in both events, placing fourth in the 100m and third in the 200m with a time of 26.37. Highlights from the field events included junior Emma Richards’ second place finish in the discus throw for 48.10 and senior Elli Kimes’ third place finish in the pole vault at 4.17m. Junior teammate Kassidie Stimmel followed Kimes for fourth place at 4.02m.

“It was tough going,” said coach Jerry Baltes. “Athletes having to dip their feet in freezing cold water seven or eight times in the same event is definitely going to play a factor in how they compete as individuals.”

In both the men’s and women’s 4×400 relay races, GVSU placed second, coming in at 4.05.13 for the women and 3.25.12 for the men. Sophomores Brendon Edoff, Xavier Armand, Ethan Pyeatt and Harris ran for the men’s side and freshmen Ashtyn Gluck and Deji’ona Simpson with sophomores Isabel Absouch and Madelyn Allman ran for the women’s side.

“We dealt with pretty poor weather elements but did our best to embrace them as we competed,” Baltes said. “Obviously we wanted to do better, but considering what we were up against as far as weather conditions, we still competed as well as we could.”

The fact that all of the athletes were together for this invitational helped lift the overall mood and encouragement for the Lakers, but they’ll be splitting up again this coming weekend for the Flames Invitational in Cleveland, TN, Hillsdale Outdoor Invitational in Hillsdale, MI and the Pacesetter Sports Invitational in Terre Haute, IN April 8-9.