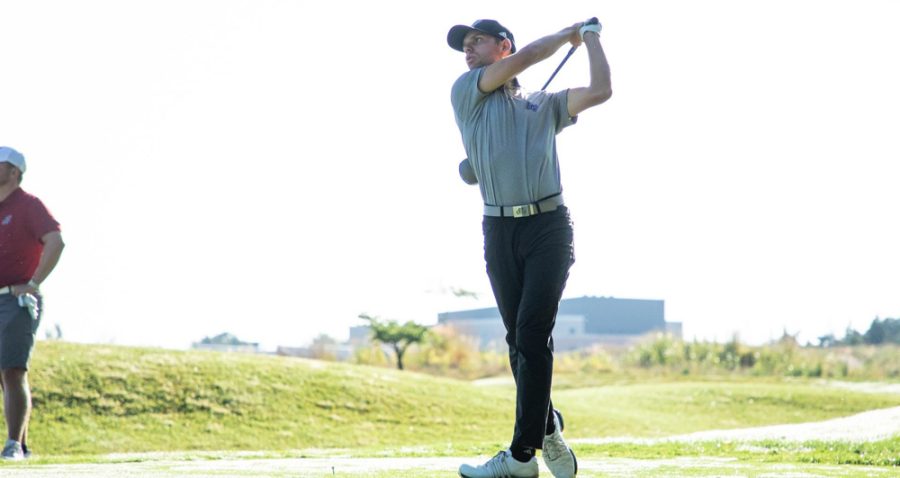 The Grand Valley State University men’s golf team brought home a first-place finish from the Big Blue Course at the University of Kentucky March 28-29. The Lakers recorded the fourth-lowest 54-hole score in GVSU history with an 854 (-10) and had the best par 5 average of 4.67 to round out the Findlay Spring Invite.

“We played some solid golf, and nothing was really too stressful,” Krueger said. “It was good to see the team pick each other up.”

The Lakers went into the final day of the competition holding first place and finished on top, claiming their second win in the 2021-22 schedule.

“It was a really good team win,” said coach Gary Bissell. “Everyone did their job at one point or another. I’m proud of the guys and what we accomplished here.”

DeLong was named to the All-Tournament team as he finished second with an eight-under par (208). The redshirt freshman scored a 67 (-5) in the first round, par (72) in the second and 3-under (69) in the final round, tying the second-lowest 54-hole score in school history. Krueger registered a total of 14 birdies in three rounds, plus one eagle in the final on a par-5 565-yard 16th hole. Junior Eric Nunn tied for ninth with Kruger scoring -1 (215). Nunn tallied four birdies in the last round, moving him up 19 spots on the leaderboard on day two.

Redshirt freshman Drew Coble tied for 40th with a 75 (+3) in the third round for a total of 221 (+5).  Sophomore Tanner Moore scored his best round of golf on day two with a two-under par (70) in the final round. Moore notched five birdies in the same round to help secure the Lakers’ victory over second place Findlay, finishing tied for 60th with a 225 (+5).

“Now we have to focus our preparation for the post-season,” Bissell said.

The Lakers’ next competition will be at the Argonaut Invitational in Pensacola, FL at the Pensacola Country Club on April 4-5, their second-to-last competition before the GLIAC championships.

“We’ve just got to keep playing the best golf we can,” Krueger said. “We’re a really good team and want to continue winning, especially the GLIAC championship.”