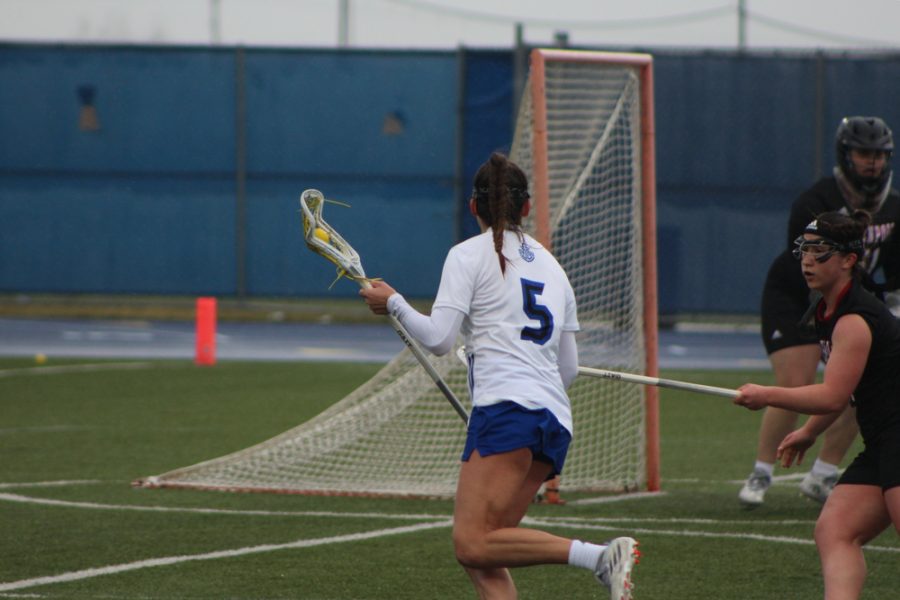 The no. 11 Grand Valley State University women’s lacrosse team (12-1) hosted cross-town rival no. 24 Davenport University (9-2) on March 30. The Lakers controlled the entirety of the game on their way to a 19-3 victory.

Sophomore attacker Maddy Champagne scored the Lakers’ first points offensively with a highlight-reel goal. While driving to the net, Champagne was fouled but still able to find the score as she got the shot off by sending the ball between her legs while facing backward. The ball went between the legs of Davenport’s goalie to give the Lakers an early lead. Davenport then attempted to respond as they were able to find a good shot on goal after long offensive possession, but sophomore goalie Audrey Malone made a save to prevent Davenport from gaining any momentum.

To help extend the early lead, freshman midfielder Ashleigh Rothe and sophomore attacker Molly Bursinger each scored. This put GVSU up 3-0. Davenport tried to stop the Laker’s early run with a goal of their own. Less than a minute later, junior attacker Kate DeYoung scored to get the Laker’s lead back to three. With one second left on the first-quarter clock, fifth-year midfielder Olivia Esposito scored a free-position shot to put GVSU up 5-1.

A lot of this early success can be attributed to the Laker’s ability to control the draw and set the pace early led by Champagne, who competed in a large portion of the faceoffs.

“I think it helps us start really fast, which we did again today,” said coach Mackenzie Lawler. “We changed the game plan up a little bit on the draw and Maddy (Champagne) was winning more to herself, versus winning out on the circle to Molly (Bursinger). I think she has done an outstanding job, really bringing that back into her game and being really confident on the draw.”

The Laker’s momentum rode into the second quarter as they relentlessly added to the scoreboard. DeYoung and Rothe started this offensive attack as they each scored early in the second quarter. Sophomore midfielder Sydney Stone and Champagne each scored in the middle of the second quarter as well. Fifth-year attacker Sophie Conroy found the back of the net for the first time with two minutes left to go. To end the quarter, Esposito scored another closing goal, propelling GVSU to an 11-1 halftime lead.

Coming out of the half, Conroy caught fire and scored the first three goals of the quarter. The only other goal of the third quarter came from Esposito. At the end of the third, the Lakers led 15-1.

In the fourth quarter, Davenport attempted a late comeback as they scored two goals. However, two goals from Conroy and a goal from Rothe made it clear the Lakers would leave victorious. Sophomore midfielder Hailey Crittenden also added a goal before the final horn. In the end, the GVSU left with a 19-3 victory.

At the end of the day, Conroy finished with six goals and two assists. Esposito and Rothe each finished with three goals. Maddy Champagne finished the day with two goals and nine draw controls.

“I honestly could not (perform at that level) without my circle people,” Champagne said. “Without the communication, we would not be able to win that many.”

Once GVSU had the ball Conroy was able to manage the Laker’s offense. To pair with her impressive stat line, she led the offense while being efficient, shooting six for eight from the field.

“I think (her performance) just really speaks to her leadership and the drive she had to come back for her fifth year,” Lawler said. “It is not meant for everybody, and I think her offensive leadership really calms our team.”

This win over Davenport was GVSU’s eighth win since the cross-town opponent transitioned to DII. In this period, Davenport has not yet beat the Lakers.

“It feels good (to win),” Conroy said. “You have the fire fueled up in you and you’re ready to go. The locker room is hype in the beginning of the game.”

The GVSU women’s lacrosse team will be back in action on April 8 when they hit the road to take on Upper Iowa University.