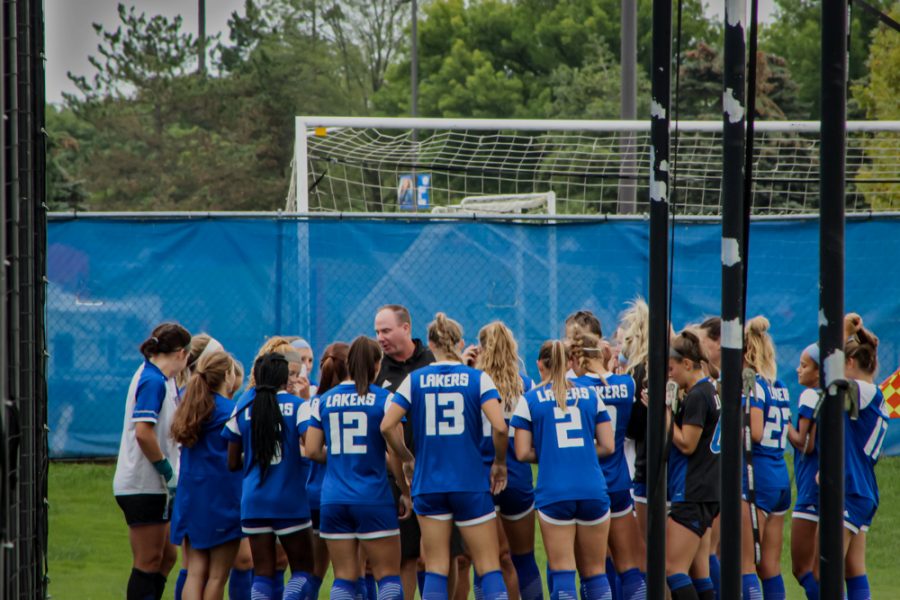 After yet another incredible soccer season, the Grand Valley State University women’s soccer team bids another farewell to their second head coach in the last two years, Jim Conlon.

Coming to GVSU to replace coach Jeff Hosler after seven years, Conlon started off with the Lakers at the beginning of the 2021 fall season to go on to win the teams’ seventh NCAA DII National Championship. Before coming to GVSU, Conlon coached the DIII Washington University Bears to three National Championships, making his success this past season after the jump up to DII even sweeter.

The roster that Conlon inherited from Hosler was a huge contributing factor in that success, highlighted by senior midfielder Cecilia Steinwascher, the four-time First-Team All-America and All-Region winner and United Soccer Coaches National Player of the Year. She’s also a three-time GLIAC Defensive Player of the Year recipient — the first in GLIAC history to receive the award three times. For her performance this past season, she was a finalist for the prestigious DII Honda Athlete of the Year award.

The team’s 24-1-2 overall record was a result of was helped by junior forward Greta DeLoach’s 20 goals on the season, sophomore Kennedy Bearden’s 15, redshirt freshman Taylor Reid’s seven, among the many other leading contributors on this season’s elite roster. The team was also able to achieve 18 shutout games, leading the entire NCAA for the 2021 season.

With great success in his inaugural season with the Lakers, Conlon’s decision to step down as the head coach came as a surprise to the team once again, but due to mental health concerns with Conlon’s family. The GVSU community has shown great support for his difficult decision.

“I’ve had an amazing experience working at this university and with such outstanding young women, coaches and administrators,” Conlon said in his official announcement. “I will always cherish the relationships I’ve made and value the experience and memories from my short time here.”

As just the fourth coach in the GVSU soccer program’s history, Conlon took the reigns on an already outstanding team’s season, allowing the Lakers to do the work they knew needed to be done, leaving a legacy nonetheless despite his short-term stay.

“Arriving four days before the season started, and having it culminate in a national championship speaks volumes about his ability to bring together a team, coach the game of soccer, and approach to building a culture of resiliency,” said Director of Athletics Keri Becker in the press release. “We are disappointed to be losing him but respect his decision to place his family above all things.”

Looking ahead to next season, the Lakers who won’t be graduating are left to welcome another new head coach as well as their influx of new recruits. However, their consistent success as a program is sure to bounce back again.

“This program is special, and I’m excited to watch it continue to grow into the future and am proud to be a part of its legacy,” Conlon said.

For the off season, the Lakers have until September before their new season starts. In the meantime, the GVSU Athletic Department is seeking another head coach for the program who can lead the fierce and spirited soccer team to another victorious season.