Column: I can’t play the Unofficial GVSU TTRPG, so now you have to 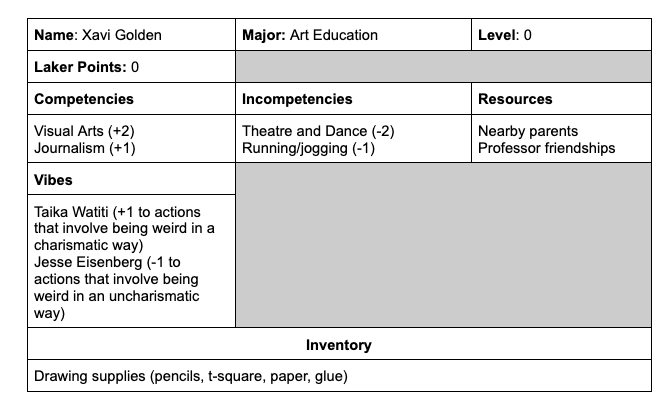 In September 2021 I, alongside my roommates, wrote the rules for the Unofficial Grand Valley State University Tabletop Role-Playing Game. Truly, this was a time before final projects, exams and medical school applications.

We came up with roles, rules and a character creation system, but we never actually got the chance to play it. Being seniors, as the 2021-2022 school year progressed, life got in the way and time ran out. Soon, roommates and friends were moving out and schedules became cluttered with due dates and pseudo-depressive episodes.

My friends and I might find a time and a place to play the— and I cannot emphasize the ‘unofficial’ part of the title enough— Unofficial GVSU TTRPG, but until then, here are some very broad rules so you might have a chance to play it yourself. All you’ll need are some dice, pencils and paper.

The premise of the Unofficial GVSU TTRPG (which is largely owed to my pre-med roommate) is simple enough; the large-scale lies and confusion of the Trump administration and the baseless disinformation campaigns that undermined COVID-19 safety guidelines have damaged the fabric of reality and the collective American psyche, allowing supernatural creatures and forces to manifest themselves on GVSU’s campus from the psychically-damaged minds of its students, who must take it upon themselves to solve the problem. (Monsters are leaping out of students’ imaginations and into the real world, and they have to fight them.)

There are two roles in the Unofficial GVSU TTRPG: “Students” and the “Dean.” The Dean is like the Dungeon Master (of Dungeons and Dragons), running the game and guiding the direction of the story. The Dean outlines each session’s story, delegates dice rolls and manages non-player characters. Students react to the Dean’s story, rolling dice (two six-sided dice, to be precise) to determine the outcome of their actions.

If you’re well-versed in tabletop role-playing games, you might recognize some of the Unofficial GVSU TTRPG’s mechanics from Powered by the Apocalypse role-playing games. Legally speaking all similarities are, of course, unintentional. (Speaking frankly, we took a lot of notes.)

In broad strokes, students should take actions that align with their competencies and good vibes, and avoid actions that align with their incompetencies and bad vibes. Being faithful to their character as they play the game— role-playing yourself, really well— earns a player Laker Points, which they can use to harness the reality-warping magic from the premise of the Unofficial GVSU TTRPG to do cool, crazy stuff.

The most important rule, of course, is having fun. With roommates, friends or maybe even faculty— what are office hours for, anyways? — hopefully these (notably untested) rules will create some fun moments amidst the chaos of being a college student.