GV students could have an impact on midterm elections 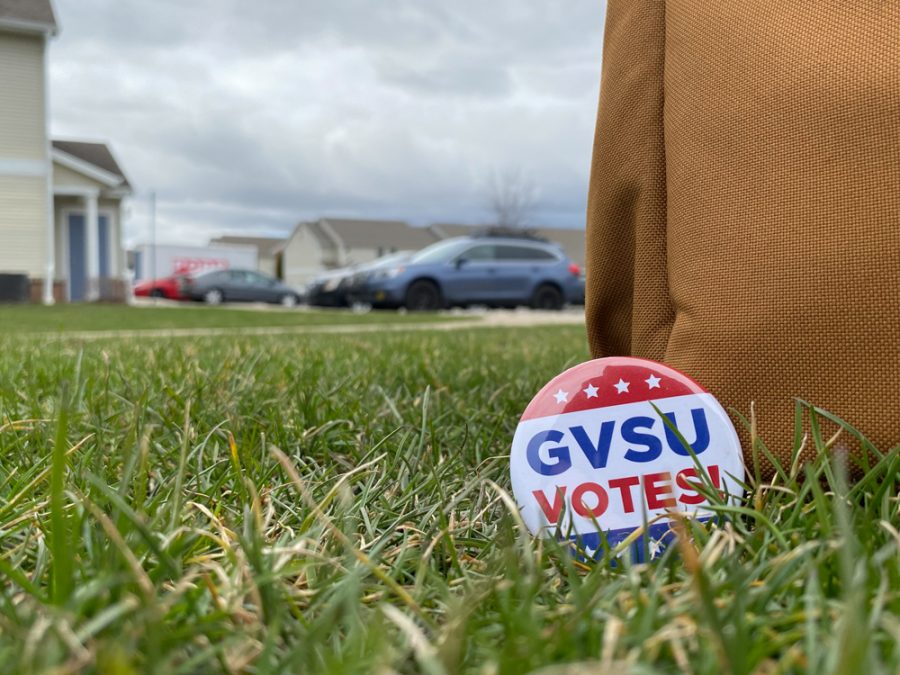 As the summer of 2022 approaches, so do the primary elections that will determine who’ll represent major political parties on the ballot in the November midterm elections.

With these decisions fast approaching for voters across the state, Grand Valley State University occupies a unique position in Michigan elections as a hub for the emerging power of a growing constituency: the youth voters of Generation Z.

At GVSU, data from Tufts University’s National Study of Learning, Voting and Engagement (NSLVE) found that the voting rate among students increased just over 21% between 2014 and 2018.

Landon Myers, the Michigan State Coordinator for the Campus Vote Project, said that encouraging efforts to facilitate this rise is key in ensuring that students’ opinions are registered in the policymaking process.

“Making sure that college students and young people are voting means that they are forcing their way to that table and they’re being to get their voices a little bit more heard, a little bit more represented,” Myers said.

The increase in voter engagement is one that continues to intensify in youth populations throughout the country.

Data from the Center for Information and Research on Civic Learning and Engagement (CIRCLE) at Tufts University shows 54% of Michigan voters ages 18-29 cast their ballots in 2020. This was a 12-point increase from the last general election in 2016 and only 11 points behind the Midwest leader, Minnesota.

On the ground, those numbers represent thousands of GVSU students who’ve voted to have their voices heard. One of those students, Jack Caron, volunteered as a campaign surrogate for a 2020 presidential campaign.

“I was basically just coordinating with other students who wanted to volunteer,” Caron said. “And it was sitting on campus – not pushing a lot to students – but just asking them if they’re registered to vote and offering free stickers to them and just getting them informed.”

Majoring in journalism with a minor in political science, Caron is a voter who feels a responsibility to actively participate in politics.

“I’ve kind of always been interested in politics, I just think it’s really important,” Caron said. “I hate hearing the complaints of someone in a city or an area or whatever it is and (that person) not voting and not doing something about it, not supporting, not looking it up and figuring out who’s supporting what.”

While GVSU students like Caron have been voting in larger numbers over the past decade, many in the campus community remain without an inclination to vote.

The same NSLVE data that recorded a large jump in student voting at GVSU still revealed that the overall campus voting rate stood at just 35.7% in 2018 – 3.4% behind the national average for collegiate institutions.

“The biggest thing that I learned myself is that so many people my age – I’m talking 18-22 range – are just not registered,” Caron said. “They just don’t vote because they don’t care.”

To help encourage turnout, Caron said he found an effective tactic was citing how little time it would take for students to vote given the satellite polling location in the basement of Kirkhof Center.

“You go in there and you register to vote,” Caron said. “They give you a ballot and you fill it out right in the lobby of Kirkhof. Then you give it back to them and you just voted.”

Along with time, individual academic interests and proclivities are elements that Myers said he believes are important to consider when getting students to vote.

“I know that’s definitely a specific area that we focus on and a lot of campuses focus on,” Myers said. “Trying and working on those voting rates for majors that don’t vote at the same rate as others.”

With turnout rates varying historically among different majors, Myers said he sees relating a student’s work to government decisions as a useful tool.

“Having funding coming from the government for the work that (students) are studying and learning is really important,” Myers said. “Trying to connect that to their career could help in (raising turnout rates).”

One of the most consequential things that can be done to engage college voters, Caron said, is to put youth-related issues in the spotlight and ensure that no one takes this growing voting bloc for granted.

“(Officials) really need to address the younger people and the younger issues that are going on,” Caron said.

Primary elections in Michigan are set to take place on Aug. 2. Should the rising trend of youth voter turnout hold, GVSU students could have a sizable impact on who is elected to local, state and congressional offices.