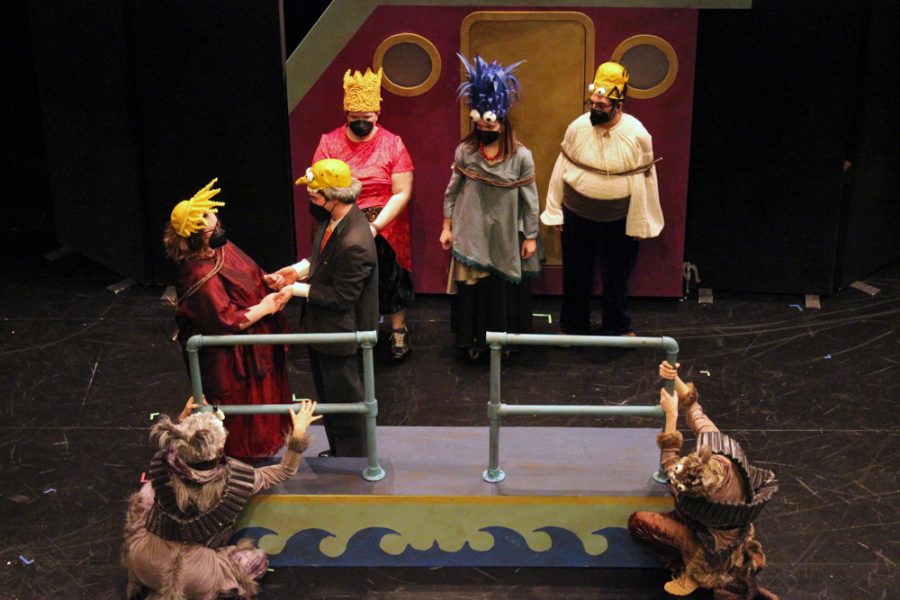 From April 1-10, Grand Valley State University Theatre has hosted “Mr. Burns: A Post Electric Play,” a musical that recreates an episode from the popular show “The Simpsons” with student actors and crew members.

Originally written by Anne Washburn, Mr. Burns was the brainchild of a meeting between Washburn and a group of actors. They had a conversation trying to remember a particular episode of “The Simpsons” and it turned into a play about how art transforms with time and its significance to humanity during tough times.

GVSU Theatre selected the play because of its relevant thematic elements. Sarah Spencer is a senior writing major and theatre minor at GVSU and acted in the play. She said she connected with the play’s themes and their importance to the Laker community.

“There’s not been a sense of normal in so long, and a play about surviving the end of the world as we know it and clinging to art is definitely something that so many of us have experienced in the last few years,” Spencer said. “I got involved in the production because of how relevant the show seems and I had to jump at the opportunity to work with our amazing director Diane Machin before I graduate. Plus, it’s an amazing script with such strong writing that even reading it drew me in.”

Spencer was tasked with two roles: Colleen and Lisa Simpson. She said she was excited to try and execute these unique roles, and was excited to sing and dance on stage again.

“My character has no lines in the first act of the play, so it was a really interesting process trying to figure out how to bring Colleen to life without saying a word,” Spencer said. “It’s such a fun role, I get to act with such a stellar cast and I get to dust off my singing and dancing skills as well.”

The concept of recreating a “The Simpsons” episode within a play was also something that excited Spencer. Preparing for the show required the cast to study the episode “Cape Feare” in order to remember the events so they could retell it on stage. Spencer said that it was a challenge that was fun to take on.

“Everyone in the cast watched the episode ‘Cape Feare’ so we all have a sense of what we’re trying to do,” Spencer said. “But of course, memory isn’t always 100% correct, so some things get mixed up or forgotten. It’s really interesting to see what is remembered by the characters at different points in time and what changes through the course of the play.”

One of the most important aspects of the play was of course the fact that it symbolized a move back towards normalcy. Spencer said she was thoroughly excited to be performing again and completed the project with a renewed sense of optimism.

“I think my biggest takeaway is that I got to experience how fun doing theatre can be again,” Spencer said. “After a year of online performances and worrying about the future of live theater, it was so refreshing to be able to dive into this show and just have fun. I left every rehearsal with a huge grin and I’ve looked forward to every performance we’ve had. It’s definitely a memorable show to go out on as a graduating senior.”

For more information on upcoming GVSU Theatre events, you can visit their Laker Link page.