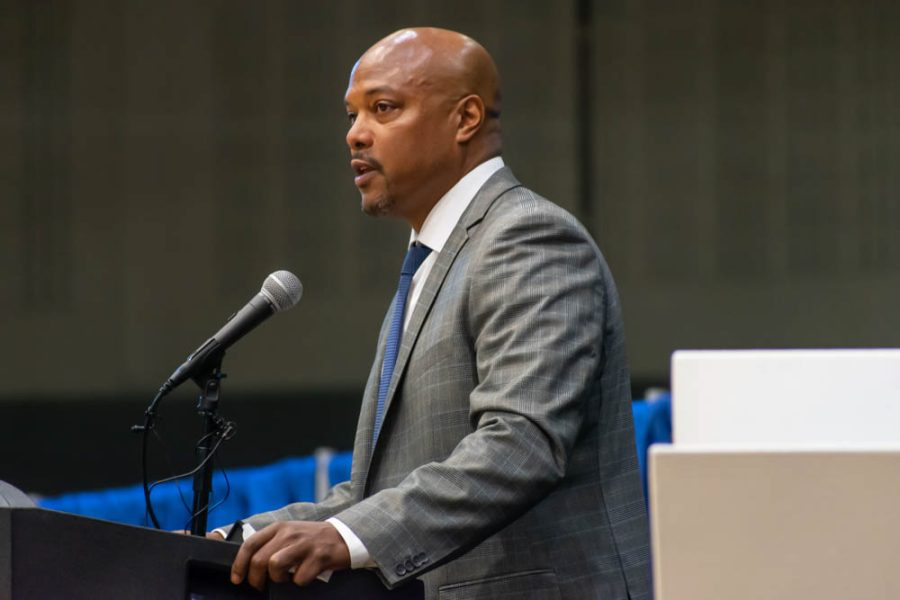 A new era is beginning for the Grand Valley State University men’s basketball team after 18-season head coach Ric Wesley stepped down earlier this month. GVSU welcomed Cornell Mann with a press conference on April 7, recognizing him as the new leader of the men’s basketball program. He will also serve as the first African American head coach in GVSU Athletics history.

“First of all, I appreciate being a coach here, (but) the fact that I’m the first Black head coach here is even more awesome,” Mann said. “I think it’s a great start, it’s a credit to President Mantella and Athletic Director Becker and her staff.”

Making the transition from DI to DII isn’t the only thing Mann will be adapting to at GVSU, as he’s also starting his first head coaching position.

“It’s all basketball,” Mann said. “When I set out to become a coach, my idea of coaching was to help young people (…) I coached high school, AAU, DIII, junior college, high level and my aim is to impact young people and make the court my congregation.”

During his introductory press conference, Mann laid out his plans for how the team will impact the GVSU community — as well as the state of Michigan — with basketball and community outreach.

“I think it’s big for the home state and I think it’s really big for my community,” Mann said. “Royal Oak Township gets to have me more. I get to share myself with them more. I get to impact my home community more and for me, that’s paramount. That’s really important because I want to help young people and why not help young people from where I’m from?”

“The transfer portal will be an asset to all programs, including this one,” Mann said. “But I wouldn’t say I’m going to live in the transfer portal. When I was talking to the school I said, ‘It will not be Grand Valley Portal State University.’ We’ll work with whatever nudges we need to get the proper players in the right place.”

Looking forward to his next chapter in the collegiate basketball world, Mann plans to prioritize his connections with the student-athletes on the team and the new recruits coming in for next season.

“You have to get to who they are, where they’re from, who they’re about and then you can do it,” Mann said. “The problem with that is everyone in the transfer portal is moving fast — I’m not going to move fast like that, I have to get to know the guys first.”

As the GVSU basketball program graduates six seniors — Jake Van Tubbergen, Christian Negron, Blake Verbeek, Jordan Harris, Issac Gassman and Deleon Brown — Mann is ready to build relationships with all the players returning as Lakers next season and lead a new era for the program.