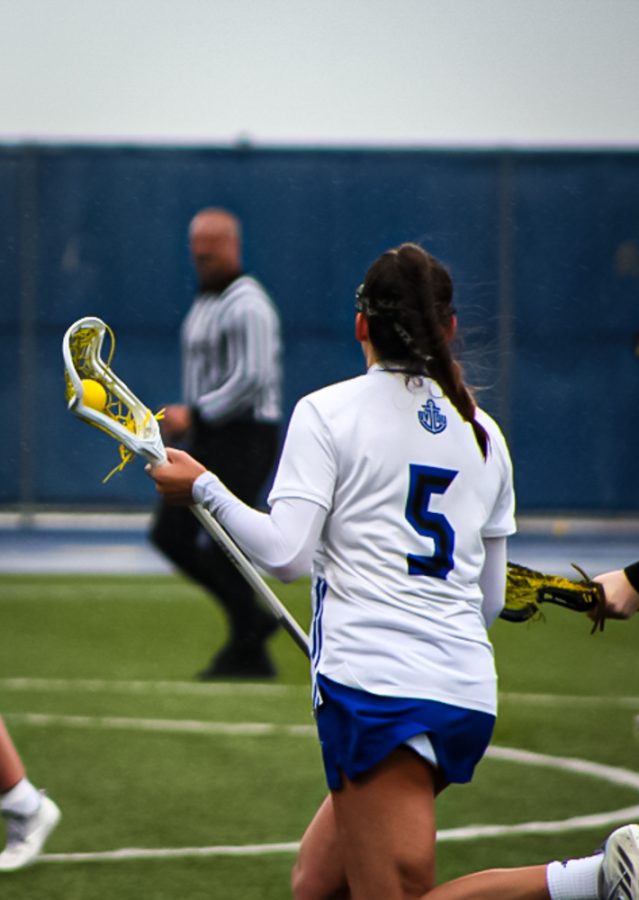 This was the Lakers’ second game against Upper Iowa this season. In their first matchup on March 27, GVSU won 24-0.

Early on in their latest matchup, it was clear the Lakers were looking for a similar outcome. GVSU scored nine goals in the first quarter while holding Upper Iowa scoreless. In total, seven different Lakers found the back of the net in the first quarter. This was led by fifth-year attacker Sophie Conroy, who scored three goals in this quarter alone.

GVSU’s success continued into the second quarter. Offensively, the Lakers put up six more goals to bring their total to 15. Junior attacker Kate DeYoung scored two of these goals while Conroy added one as well. After Upper Iowa was able to score two goals this quarter, the Lakers went into halftime up 15-2.

With a large lead heading into the second half the Lakers were able to go deeper into their bench and work on sets that they normally wouldn’t use.

“It’s really great being able to go deeper into our bench and work on some new concepts that we’re trying to work on going into our second round of GLIAC play,” said senior defender Leigha Johnson.

The Lakers continued to perform well as they worked on these concepts in the second half. In the third quarter, Conroy and DeYoung each scored again. Fifth-year midfielder Olivia Esposito and sophomore midfielder Sydney Stone also added to the Lakers’ total. With only one goal from Upper Iowa, GVSU led 19-3 heading into the final quarter.

The Lakers were led by Conroy who finished with five goals. This put Conroy’s season goal total at 44 which eclipsed her 2021 season where she scored 43 goals.

“It feels really good (to perform at a high level),” Conroy said. “I have to give it all to my teammates; to the defense that pushes us in practice, to my fellow attackers who are assisting me with the ball and helping me out with the plays, to everyone who has been a consistent player on the offense. Getting that flow of the offense has really helped me step up as a leader and I couldn’t be more grateful.”

GVSU had a handful of other players put up big numbers in their win against Upper Iowa. DeYoung finished with four goals and an assist. Rothe and Stone each had two goals and two assists. Ziegler had two goals with an assist. Junior midfielder Molly Bursinger also scored two goals.

“It’s been fun playing through the streak,” said coach Mackenzie Lawler. “I think what’s been even better is each game that we come out, we’re playing better and better as a team. I think that’s going to be great momentum leading into the GLIAC tournament and hopefully the NCAA tournament.”

During this streak, GVSU has performed exceptionally on defense. The Lakers have only allowed 45 goals over these 11 games, which averages out to just above four goals allowed per game.

“I think this year in general we’ve been focusing on us a lot and playing to our strengths,” Johnson said. “We’re still obviously scouting other teams, but with the second round of GLIACs, we’re just constantly pushing ourselves. We’re our own biggest competition and we’re just setting our goals higher and higher with each game we play.”

This growth will be important as the Lakers begin to play each team in the GLIAC for the second time this season.

“For us, it’s just sharpening the things that we did in the first game,” Lawler said. “Obviously, sweeping the first half of the GLIAC, we had a good initial gameplan. But all of those teams are continuing to improve throughout the year so we need to make sure we’re stepping up our game as well.”

The GVSU women’s lacrosse team will continue their stint on the road as they travel to face Davenport University on Thursday, April 16.