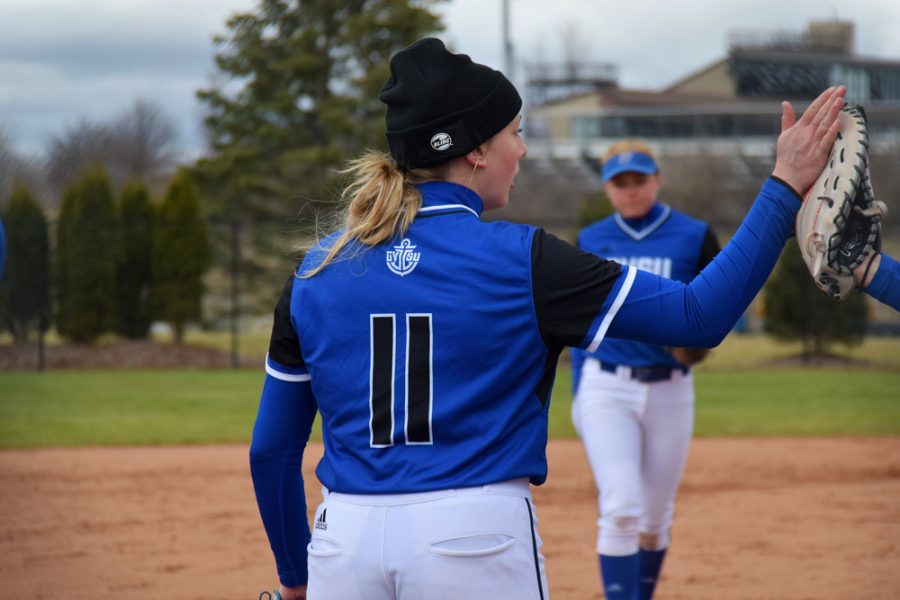 The Grand Valley State University softball team (23-4) expanded their winning streak to six on April 7, after sweeping the University of Wisconsin Parkside (5-23), defeating the Rangers by scores of 7-0 and 6-0.

“I thought we played Laker softball; we got good pitching, we had good defense, we got the bats going and those are the three facets of the game that we’ve done well for the most part and got it done today,” said coach Dana Callihan.

Redshirt junior pitcher Hannah Beatus led the way for the Lakers in the first of the two games, as she went into the final inning holding a perfect game. However, only needing one more out, she had a wild pitch that allowed a UWP player to advance to first base, losing Beatus her chance for her second perfect game of the season.

Beatus said that knowing the perfect game was on the line didn’t add any pressure heading into the last inning.

“You know where you’re at, especially in those situations, and either way (if you get it or don’t), it’s cool,” Beatus said.

Beatus did end the first game with a no-hitter, her third of the season, helping advance her record to 11-1 when starting in the circle for the Lakers.

“It’s good (having my third no-hitter), it’s just a testament to how amazing of a pitch caller Morgan (Wagner) is and she’s working at that all the time,” Beatus said. “Our defense (played well) too for eating up ground balls and making plays and getting the job done.”

On the offensive side for the Lakers in game one, senior center fielder Bailey Thatcher went a perfect three for three, scoring two runs and adding an RBI. Redshirt junior catcher Morgan Wagner went three for four at the plate, while also scoring two runs.

Game two was a slow start for both teams, as GVSU led with a slim 1-0 advantage at the end of the fourth inning. The Lakers broke the game open in the bottom of the fifth, where they scored four of their six runs of the latter half of the doubleheader.

“I think we just got some balls to fall in the holes (in the fifth inning),” Callihan said. “Earlier in the game we were hitting some shots just right at them and they made the defensive plays on it.”

GVSU went on to bring in one more run in the sixth inning, giving them the 6-0 advantage heading into the final inning before once again holding the Rangers scoreless in the second game of the doubleheader.

Wagner helped lead the way again in the second game, finishing with two hits and two RBIs. Sophomore third baseman Megan Koenigshof went two for three at the plate, adding a run and an RBI in the victory.

The six-game winning streak comes after dropping two games the previous week — one to Ferris State University and the other to Purdue University Northwest.

“I think we’re just playing with confidence, we have some swag, we are doing the little things right and once you can do those things and combine them all together, then good things will happen,” Beatus said.

Looking ahead, GVSU will host Saginaw Valley State University (18-10) on April 9 to continue their GLIAC schedule.