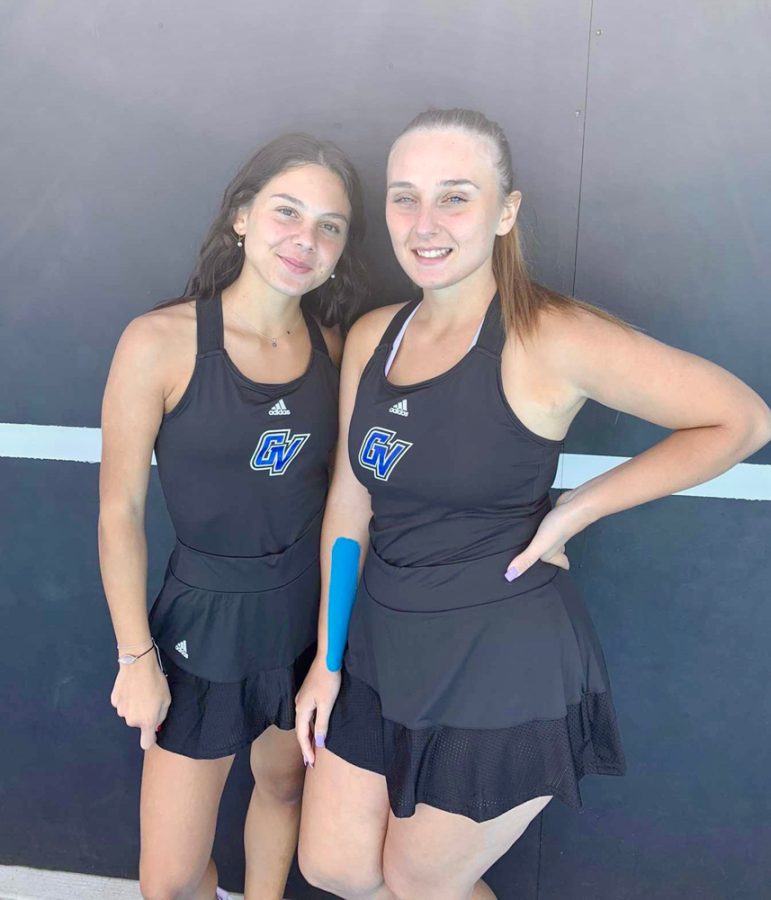 When it comes to Vera and Vasileia Griva, two stars for Grand Valley State University’s women’s tennis team, competing at a high level comes naturally — especially since they’ve had the advantage of playing together since childhood.

Originally from Athens, Greece, the Griva sisters were just as much of a force on the court back home before they decided to take their talents overseas and study abroad in West Michigan.

However, Greek tennis players must either end their careers entirely to further their education in college or go straight to professional tennis. Knowing they wanted to pursue both, Vera and Vasileia decided to look into options overseas.

“I started emailing multiple coaches around the U.S. and after communicating with many of them I decided to come to GVSU,” Vera said. “I loved the campus, the quality of athletics and the fact that my best friend (Vasileia) would be with me.”

Vera didn’t skip a beat during her freshman year of college. She was named GLIAC Freshman of the Year, named to GLIAC First Team honors and had a singles record of 21-6 overall.

Since then, Vera was named the GLIAC Player of the Year and posted a singles record of 18-2 at the No. 1 playing position (20-4 overall) her sophomore year, while being named to the GLIAC All-Academic Excellence team. She also received First Team All-GLIAC honors in her junior year.

The younger of the two, Vasileia, has shined on the court in her sophomore season this year. As a freshman, Vasileia was 12-3 overall in singles and was 11-4 overall in doubles. This season is a continuance of the previous ones, as she is currently 10-4 in singles and 11-3 in doubles (5-0 in conference for each category) while also riding a five-game winning streak in each category.

Vasileia credits the success of this season to staying mentally prepared for what is to come on the other side of the net.

“Staying focused and determined on your goals while trusting the process (is the key to success),” Vasileia said. “I go for the extra mile even on days that seem impossible.”

Coach Samantha Schall said she knows elite talent when she sees it and that it’s been an honor to have two players like the Griva sisters to add more versatility to a diverse team.

“They are both extremely talented tennis players,” Schall said. “They both compete very well and even when they get nervous it doesn’t affect their play much at all. They both seem to have a winning instinct in the most important moments.”

The Griva’s have proven their sisterhood connection to be effective when competing together in doubles as they currently hold an 8-3 record, are undefeated in conference (5-0), and riding a five-game winning streak.

“Being sisters helps a lot, but this is not the first time that we are playing together,” Vasileia said. “There were several tournaments back home that we played together and we were successful as well.”

Although the duo works well together on the courts, they still have all the typical sibling quarrels and banter from time to time.

“It is great that I get to play with my sister my last year here,” Vera said. “However, sometimes it can get frustrating because as most people with siblings know, your sister or brother can drive you crazy in just seconds. We do have some small arguments from time to time, but we both know that if we want to be successful and win, we have to put these arguments behind us.”

With the regular season coming to an end and the team leading the GLIAC (10-4), both sisters recognize the tough matches ahead that could prevent the possibility of the team securing the GLIAC championship and making a potential run in the regional and national tournaments.

“It is very important that we remain focused as GLIAC is not over,” Vasileia said. “In order to get there, we need to remain humble and play as we have been playing so far.”

As Vera’s last season playing for GVSU comes to a close this year, the pair are motivated to send their seniors out this season with a national championship win.

“I am confident that this team can do great things,” Vera said. “We need to go out there and compete at our highest level because making it to nationals is our ultimate goal and we all know what it takes to get there.”

Winning a tournament at any level is one thing, but only having eight athletes on the roster makes it that much harder. However, the Griva sisters believe the roster size allows for more continuity.

“We put the extra work inside and outside the court and I think this shows,” Vera said. “I believe what is fueling the momentum right now is the bond we have created with the girls. Obviously, we are a very small team, just eight girls, so we see each other as a family.”

Though finishing the current season on a high note is the main priority, Vasileia hopes her third year at GVSU will bring success on the court and academically.

“My priority being both an athlete and a student is to be healthy,” Vasileia said. “I would like to maintain a high GPA (and) also like to make it to nationals. I am very proud of the team we have created and I believe that we might be able to do it.”

Knowing this season will be her last with the Lakers, Vera reflected on the success she achieved individually and as a team. She dedicates it all to her father, who she says was a huge influence on the sisters not only as a parent, but as a teacher, coach and mentor for the game they love most.

“It has been four amazing years at GVSU,” Vera said. “This experience has shaped me into the person I am today. It was an honor representing GVSU on the tennis courts and I am very happy that I have helped my team achieve all these great successes. It is a bittersweet feeling that this journey is coming to an end, but I will always have all these memories with me anywhere I go and I will keep supporting and representing GVSU in every way I can. After all, I am a Laker for life.”