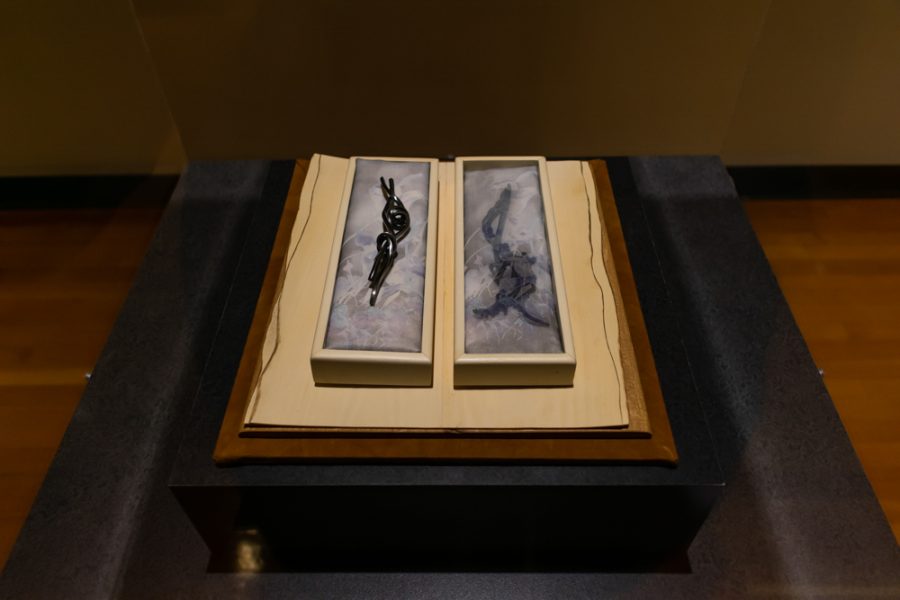 The Gravy train stops at GV

This past weekend the Campus Activities Board hosted rapper Yung Gravy for the annual spring concert. This was the first spring concert since Blackbear performed at Grand Valley State University in 2019.

Matthew Raymond Huri, also known as Yung Gravy, is a 26-year-old rapper from Minnesota. His career took off in 2017 with his song “Mr. Clean,” which samples “Mr. Sandman” by The Cordettes. Since its release, Yung Gravy’s song has gone platinum.

The concert was opened by DJ EDERZ, also known as Matthew Ednie, an emerging DJ from the Detroit area. He opened the set by mixing popular songs, giving them a house-party twist. He played both classic pop hits and new favorites, sampling Labrinth’s “Still Don’t Know My Name,” which was made popularized on “Euphoria.”

Grief is a universal emotion. It’s felt and experienced by every living person at some point in their lifetime. To explore this incredibly complex idea is the mission of Grand Valley State University professor Renee Zettle-Sterling and company with their upcoming metalsmith exhibition “Sorrow/Fullness: A Reflection on Mourning,” which will be showcased Thursday at the Haas Center for Performing Arts Gallery.

With the help of Edinboro University of Pennsylvania professor Sue Amendalara and studio artist Adrienne Grafton, “Sorrow/Fullness” will feature metalsmithing works that are meant to represent and celebrate the lives of loved ones who have passed on.

This collaboration was born out of a 20-plus-year friendship between the three artists, as Zettle-Sterling studied under the tutelage of Amendalara while attending graduate school at EU, where Grafton was an undergraduate student at the time.

All three artists have dealt with loss and grief over the past 20 years and have developed work surrounding the difficult emotion during their careers. In order to come together to create something even more meaningful, the three metalsmiths decided to join forces for “Sorrow/Fullness.”

Frederik Meijer Gardens and Sculpture Park has opened their annual Fred and Dorothy Fichter Butterflies Are Blooming exhibition. The exhibition draws in nearly 1,000 visitors each week, with guests coming to watch the butterflies’ transformation.

“(Attendees can) enjoy thousands of butterflies as they fly freely in the Lena Meijer Tropical Conservatory and learn about the positive and powerful impact flowers have on the world,” said John Vanderhaagen, media representative for the park.

There are now 60 species coming from regions all over the world, including Costa Rica, Ecuador, the Philippines and Kenya. The exhibition will host the animals in a heated conservatory. The conservatory will also feature a variety of colorful flowers including plume flower and blue porterweed, as butterflies are attracted to brightly-colored flowers.

To explore more of Colleen Garcia’s piece on the butterflies at Frederik Meijer Gardens, click here.

Black History Month is a time to celebrate, appreciate and acknowledge the rich history and achievements of African-Americans. Grand Valley State University’s Music, Theater and Dance Department closed out this month-long celebration with a live-streamed concert that was broadcasted on Feb. 25.

The show featured GVSU voice and piano students performing 12 pieces from renowned African-American composer Samuel Coleridge-Taylor’s “24 Negro Melodies, op. 59.” Organized by GVSU professors Dr. Sookyung Cho and Dr. Kathryn Stieler, the event celebrated Coleridge-Taylor’s music which features an interesting blend of sounds from South African and African-American culture. Stieler was excited about the music and thought it proposed something new for her and her voice students to learn.

“This event has given me and my students an opportunity to see how folk songs – songs that reflect both South African and African American culture – have been passed down through a singing tradition and expertly arranged for piano by a composer who, in spite of not growing up in either culture, effectively captured the essence of the cultures musically,” said Stieler.

The Grand Rapids Art Museum (GRAM) is now featuring two new exhibits that celebrate and bring awareness to Black culture. These first exhibit highlight the work of Dawoud Bey and Carrie Mae Weems in “Dawoud Bey & Carrie Mae Weems: In Dialogue.” The second, “Seen and Not Seen,” features work from local Grand Rapids artists. Both exhibits opened on Jan. 29 and will be at the GRAM until April 30.

“GRAM’s Chief Curator Ron Platt conceptualized ‘Dawoud Bey & Carrie Mae Weems: In Dialogue’ when he met with the artists back in 2018, whose questions and contributions significantly informed the framework and outcome of this exhibition,” said Alaina Taylor, GRAM Communication Assistant. “Dawoud Bey and Carrie Mae Weems are two of the most important and influential photo-based artists of our time.”

Bey and Weems are showcasing a focused selection from over 40 years of work. Both were born in 1953, during a time of social change in America. Bey and Weems have both tackled the same topics, race, class, representation and systems of power in work surrounding African American events. The two focus on the human condition and how real people have been affected by these situations.

The Pyramid Scheme celebrates, reflects on a decade of success

The Pyramid Scheme is a bar, a music venue, and a pinball arcade rolled into one hot spot in the Heartside Neighbourhood in downtown Grand Rapids.

As The Pyramid Scheme was unable to celebrate its 10 year anniversary in April 2021 due to COVID-19 restrictions, the venue will now be raising a glass during their sold-out show on Oct. 20 featuring performances from The Menzingers, The Dirty Nil, and Worriers.

With their cheers to 10 years has come some time for reflection for co-owner Tami VandenBerg.

She and her brother, Jeff VandenBerg, had originally opened a neighborhood pub called The Meanwhile on Wealthy Street in Grand Rapids.

The two were very interested in live music, but Tami VandenBerg said the pub was a bit too small, and the neighbors were not very enthusiastic about the idea.

Grand Rapids’ ArtPrize has returned with a range of artists from all over the world after a two-year hiatus.

There is a strong Laker presence at ArtPrize this year. Three faculty members, one current student and numerous alumni are participating in the competition are among the hundreds of artists who are competing in this year’s ArtPrize.

Since 2009, ArtPrize has offered an opportunity for the Grand Rapids community to engage with art of all mediums. Art is made accessible to the public in various venues throughout the city from Sept. 16 to Oct. 3.

During these 18 days, the public is given the voice to support their favorite pieces by voting online.

Some of these GVSU artists happen to have their work displayed at the same venue, The Water Colors Aquarium Gallery.

The transition from high school to college can be intimidating as many start with a blank slate and have to make new friends. For the eight freshmen in this year’s Laker Marching Band Color Guard, a second family welcomed them with open arms when they began practice in the summer.

“Color guard is just a family and we are there for each other and we help each other out as needed,” said Grand Valley State University freshman Anthony Gilchrist.

Each year, the color guard holds competitive two-day auditions. Having the ability to quickly memorize drills is a focal point of the auditions. Students are required to show that they are capable and quick learners.

“All the freshmen really wanted to make new friends,” said GVSU freshman Jenna Martin. “There were eight freshmen this year so all of us got really close because we all had this thing in common that we could talk about.”

On Oct. 5 from 12:00-1:00 p.m. Ferrato spoke with students via Zoom about her creative process, how her work is influenced, and her anti-violence advocacy efforts.

This specific talk was supported in part by the Center for Women and Gender Equity at GVSU as one of many events being held during Domestic Violence Awareness Month.

For more than 30 years, Ferrato has documented domestic violence and its impact through photography. Her work has been featured in numerous publications including Time Magazine, Life Magazine, People Magazine, and The New York Times.

In 1991, Ferrato published a book of her work entitled “Living With the Enemy” that sparked a national conversation about women’s rights and sexual violence.