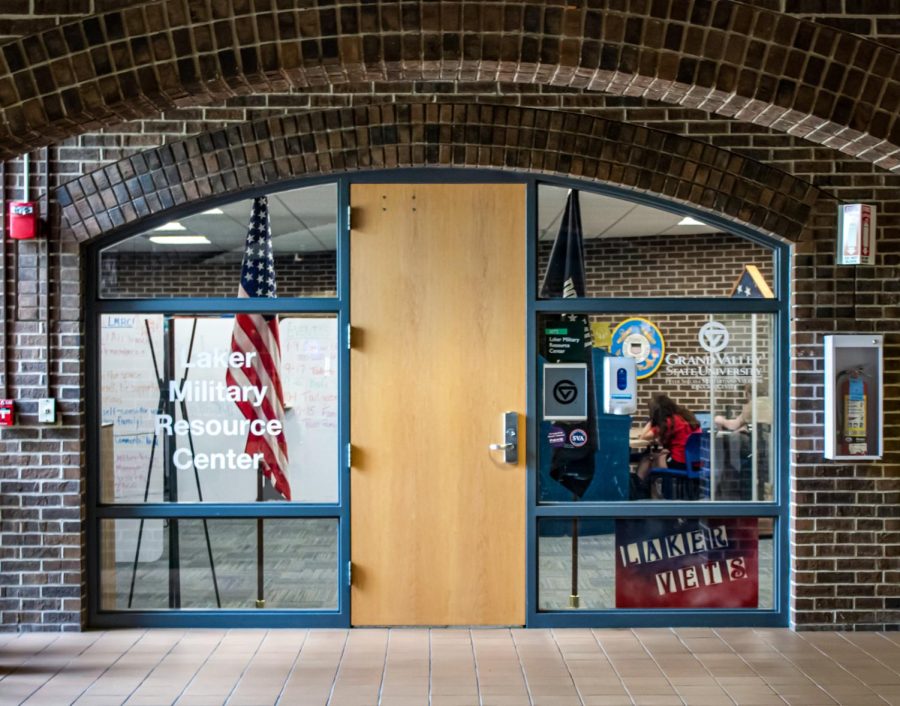 In the aftermath of serving their country, many veterans harbor invisible scars for the rest of their lives.

However, Grand Valley State University has made it an objective to provide resources for all veterans to remind them they are not alone while fighting their post-war, personal battles.

These efforts are being recognized as the university has again been deemed a top-tier collegiate destination for veterans seeking higher learning.

GVSU was awarded Gold status by the Michigan Veterans Affairs Agency in late August for the eighth consecutive year.

This highly regarded recognition indicates that GVSU has created a supportive and accommodating environment for veterans on campus.

For veterans who decide to pursue an education at the university level, GVSU entities have been visibly and vocally stalwart in their efforts to provide accommodations for the needs of the United States military veterans.

One such entity, the Peter Secchia Military and Veterans Resource Center, centers its efforts around fostering inclusive environments and support systems for veterans at GVSU.

Jill Hinton Wolfe, a United States Army veteran and GVSU alumnus serving as its current Military and Veteran Resource Manager, describes the program’s mission as having an “overarching, highminded goal of helping those with military service reach their highest potential.”

Assistance from the program can range from financial support to mental health and academic conquest.

“Our goal is to ensure their success,” Wolfe said. “If there is ever anything or anyone they need to go to for help, I will always be that person for them.”

Regarding GVSU’s status as a model for veteran support, Wolfe said that the success of the university’s efforts and Gold recognition has been the result of multiple individuals who contribute to supporting campus veterans.

“From her first days on campus [GVSU President Philomena Mantella] has shown a nuanced appreciation of both the struggles these students face and the diverse value they bring to campus,” Wolfe said.

Various other people and organizations at GVSU contribute to the recognized success of the university’s veteran support system.

Aside from university staff, GVSU has also implemented policies and protocols designed to ease the admissions process for veterans and establish resources to help them navigate the collegiate environment.

Veterans who graduated from high school in Michigan and served in the U.S. military for at least two years can receive pre-approved admission to the university. This admission can be deferred until each veteran is ready to begin their college journey.

As to her own efforts, Wolfe has worked to ensure that military veterans are receiving the opportunities and aid they need. Wolfe has been especially vocal regarding her advocacy for underrepresented military veterans like women, disabled veterans, veterans of color and those belonging to the LGBTQ community.

GVSU, Wolfe asserted, also has some of the most hard-working and involved veterans on campus.

“Nationally, they have higher (grade point averages), higher graduation rates and they take on more difficult majors than their civilian counterparts,” Wolfe said.

Travis Snyder, a veteran sergeant of the United States Marine Corps and a current GVSU student who serves as the president of Laker Vets, affirmed that the Veterans Program offers the aid Wolfe mentioned.

“GVSU is definitely vet-friendly, which strongly influenced my college decision,” Snyder said. “This program helps me, and many others, fight any intimate battles we are experiencing post-service with the variety of resources they provide us.”

In addition to assisting retired soldiers in areas where they may be struggling, GVSU’s veterans support apparatus also helps them rekindle a sense of community they may have lost since they returned home.

“The military will always be a community in itself,” Wolfe said. “At GVSU, we try to rebuild that by establishing that all veterans have aspirations they want to reach outside of war and combat.”

Snyder agreed with Wolfe that the program makes him feel like he has a veteran family at the university.

Given the sacrifices veterans have made while serving and those made in order to continue their education at GVSU, Wolfe said the university’s strives to provide help through whatever means necessary.

Wolfe said the university hosts many events with the goal of not only offering support, but also making the college experience enjoyable and fun.

“We host several veteran-related events throughout the year, including three separate events on Veteran’s Day to commemorate their service,” Wolfe said. “Also, last year we sent nine military-connected students to the Student Veterans of America’s National Conference and we provide veterans with flexible opportunities to work on campus via the [U.S. Department of Veterans Affairs] Work Study program.”

Snyder said that veterans have the opportunity to join the GVSU chapter of Student Veterans of America, Laker Vets.

“We try to find ways and events to get involved with the community of GVSU and the military community,” Snyder said. “Essentially, we aim to bridge generational gaps between veterans and other Lakers on campus.”

Snyder explained that veterans tend to be older than one another, even in their own military community, as everyone serves their time differently. So, not only does the Laker Vets society strive to connect from within, but they also yearn for connections with other members outside of their chapter beyond any potential age gap.

The success Wolfe and her colleagues have had with the program, she said, has been on an expedited track.

“I was hired at GVSU in the middle of the pandemic, and there was not a vets center at this time,” Wolfe said. “We veterans had very little support pre-COVID, but then we received a generous donation from the Secchia family.”

With their contribution and the support of President Philomena Mantella, Wolfe explained how it was possible for them to develop the best program in the state.

“Before, all we had was a hallway in Kirkhof,” Wolfe said. “Now, we have opened the door to many possibilities to build a thriving community and have since opened two whole rooms dedicated to our veterans; one located in Kirkhof at 0072 and the other at the downtown health campus.”

Those interested in exploring the full range of benefits offered by the university to student veterans can visit GVSU’s website.