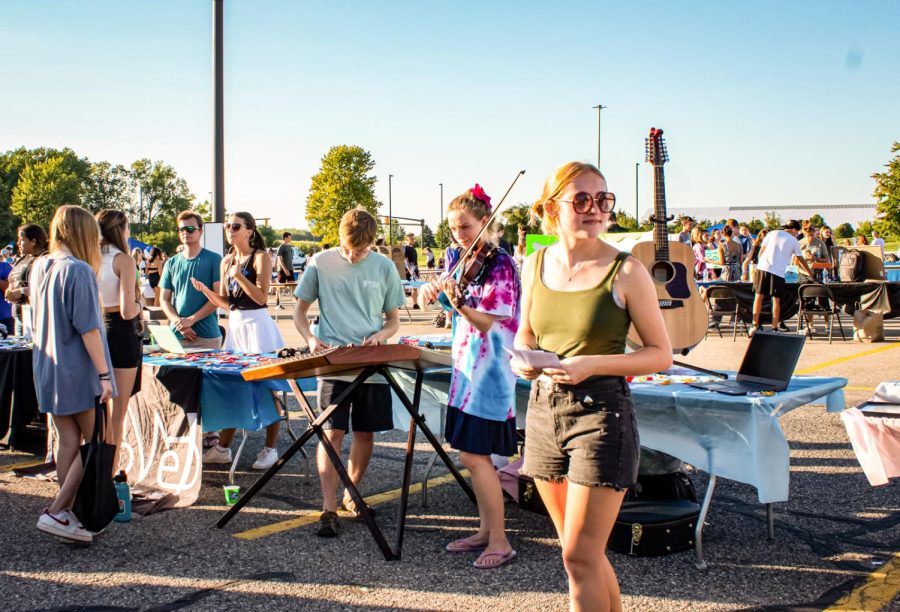 Folk Music Club is a student organization at Grand Valley State University that aims to bring together students to learn, perform and enjoy folk music.

This club focuses on learning about and performing Appalachian, Irish and Scottish folk music. Additionally, members participate in performance opportunities such as nearby music festivals and weekly meetings, held on Wednesdays, where members work to learn new music together.

Liesl Mom founded Folk Music Club last year with her brother and is now president of the organization. Mom said she wanted to create a space to appreciate folk music and bring people of all levels together to listen and learn about it.

“It is something we’ve wanted to do for a while, since we knew GV had had a folk music club but it wasn’t in existence by the time I became a student here,” Mom said. “We are passionate about folk music because it has brought so much joy and many friends to us, and we want others to be able to experience it too.”

Mom said that Folk Music Club has provided her the opportunity to make many memories and fun new experiences.

“Last year the Folk Music Club performed at the Plainsong Farm Harvest Party,” Mom said. “It was fun to take the club off-campus and share our music with the community.”

Folk Music Club is different from other music clubs on campus because it is solely dedicated to appreciating and learning about folk music from around the world.

Additionally, Folk Music Club plans to have theme nights for their meetings throughout the year and bring in new elements to the club’s meetings.

“I aim to have at least one guest speaker or performer to give a presentation on a type of folk music, perform more than we did last year and explore several more genres of folk music,” Mom said.

Mom said one goal of the Folk Music Club is to create experiences that will allow students to broaden their horizons of what music is and what music is like around the world. The club plans to have “Irish night” on Sept. 14  along with “German night” on Sept. 21. She said that they plan on dedicating a week or two to Brazilian music.

“This is not just an on-campus activity, but something that can continue to be explored after leaving college and throughout life,” Mom said. “This club provides a basis for people to go off of, providing community here and giving a foundation of tunes and experiences that can open doors in the future.”

Mom said she is excited to share the club with others and see it grow and that if people want to get involved with the club they can come to weekly meetings, festivals or events with the club.