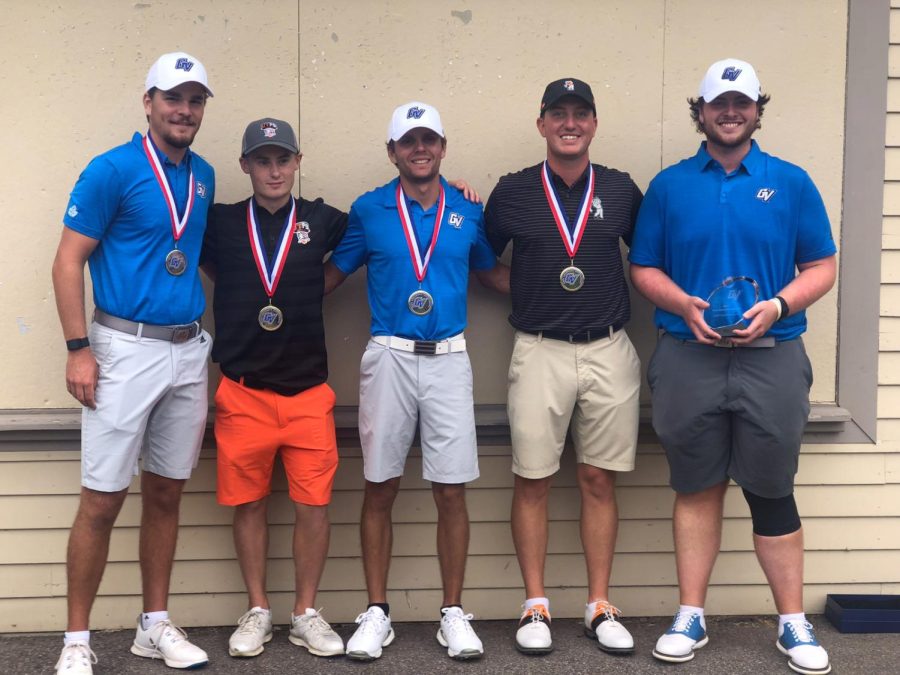 In what could be deemed as one of the more exciting openings to a season, the Grand Valley State University men’s golf team started the fall season with a stellar performance as they placed first overall in the Arendsen Invitational.

“Overall I was very happy with our performance,” said head coach Gary Bissell. “(It’s) always good to win the opening event, and all-in-all, it was a top-to-bottom great performance.”

The team opened the first day of the invite with extreme confidence as they ended with a -11 stroke advantage over the rest of the eleven competing teams, shooting a 285 (570 total) in both the first and second rounds.

Sophomore Charles DeLong, who managed to secure a spot in the 122nd U.S. Amateur Championships this past summer and was illustrious for the Lakers all throughout the 2021 season, led the charge on the first day as he shot a 140 (-2) and stood at second place overall individually. Sophomore Drew Coble was right behind DeLong as he was tied for third place with a score of even par (E).

“The first day, there really weren’t many highs and lows due to us playing 36 holes,” Coble said. “It’s always a grind on those days and you just need to be positive all day.”

Other notable Lakers weren’t necessarily the seasoned athletes GVSU typically calls upon, but instead, freshmen Andrew Gwilliams (+4, tied for ninth) and Bryce Wheeler (+6, tied for 11th) contributed to the team performance in the first two rounds that helped carry the Lakers to their win in day two.

Heading into day two, Coble was down eight strokes behind the individual first-place leader as the Lakers prepared to carry out the momentum from the first day of action.

Coble noted that the individual title wasn’t necessarily an accomplishment he was aiming for, but instead to put up numbers that would allow for a successful close out of the invite.

GVSU would ultimately do exactly that as they finished the invite No. 1 overall with a 28-stroke advantage over the second-closest team on the leaderboards, dominating both in and out-of-conference opponents with perceived ease. Although the Lakers were able to walk away from the invite with a prideful win, the individual title action went down to the wire.

Facing an eight-stroke deficit at the start of the third and final round, Coble did his best to block out any internal noise and put his best foot forward. However, he mentioned that a bit of frustration was lingering as he geared down to finish the final eight holes.

“I didn’t realize where I was on the leaderboard individually until after my bogey on the 10th hole,” Coble said. “I started the back nine off a little shaky but I hit a couple of great approach shots on 13 and 14 that led to birdies. The best shot of the day for me was the hole out from the bunker on 17.”

“I really tried to keep my emotions in check all day based on past experiences where I would get a little fired up early and it would end up hurting me,” Coble continued. “It all just came out at once after that shot (hole 10).”

Although modest in his personal reflection, Coble would put on an offensive onslaught that allowed him to soar past those above him on the leaderboard as he shot a 65 (-6) to tie for first place and force a playoff against the University of Findlay’s Tanner Grzegorczyk.

The rules of a playoff are simple: whoever puts up the best score at the end of the hole wins. In other words, sink the ball into the hole with as few strokes as possible.

In the first hole, both Coble and Grzegorczyk tied for par. However, in the second hole, Grzegorczyk shanked his shot way off the fairway as his ball landed deep into the surrounding woods.

Coble wasted no time to take advantage of his opponent’s mishap, putting together a sound close-out in just a handful of strokes that led to his first individual tournament title at the collegiate level.

“Drew’s performance was phenomenal on the second day,” Gissell said. “It was great to see him get the individual title and have some confidence going forward this season.”

“This was a really good team performance as well,” Coble emphasized. “Nick (Krueger) played really well and Charlie played good as well, but our new freshman stepped up and helped us out. It’s a good start to the year but we just need to take one event at a time and be as prepared for each event at a time.”

Three other Lakers finished in the top 10 of 87 players that competed in the tournament, including Krueger (third place, -3), DeLong (tied-fourth, +3) and Wheeler (tied-eighth, +6).

GVSU will travel to Findlay, Ohio to compete in the Doc Spragg Invitational starting Monday, Sept. 19.