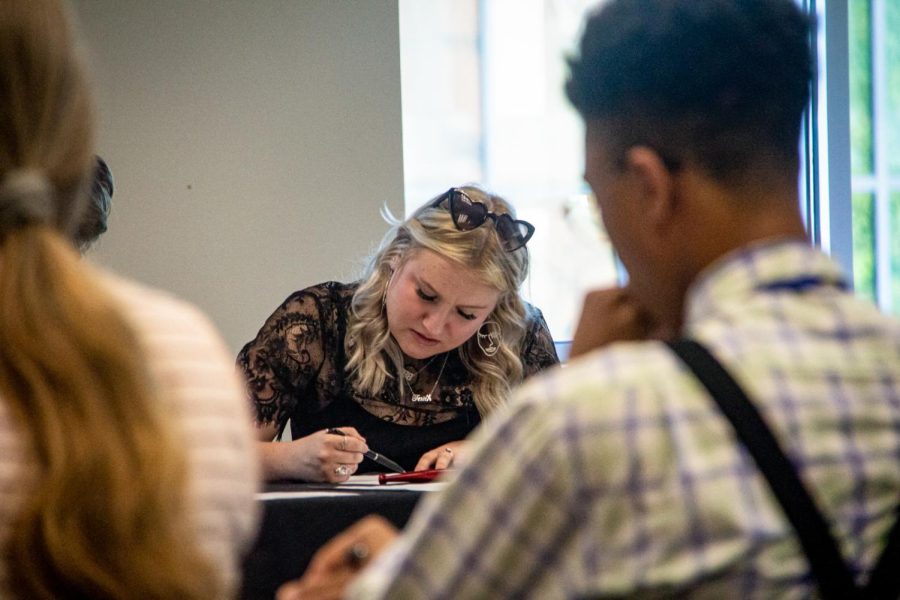 Discussing potential efforts at the Senate’s Sept. 8 general assembly meeting, multiple senators voiced concerns over what they view as a pay scale in desperate need of amendment.

Senate Vice President for Diversity Affairs Larbi Al Moutaa, whose committee has already begun drafting legislation to amend the system, said that while the full Senate has yet to formulate a stance on the matter, he and his colleagues on the Diversity Affairs Committee have identified what they believe to be severe deficiencies in the current system.

“During our research in regards to this campus-wide issue, we have determined that the current wage classification system is incredibly flawed, as it bases wage rates on job difficulty and experience, without considering the biggest and most important pillar that determines salary: market value,” Al Moutaa said.

Under GVSU’s current system, student employees are eligible for positions paying anywhere from $9.87 per hour to $17.47, with a $0.23 raise for all positions scheduled for the Winter 2023 semester. To determine wages for each position, occupations are categorized by students’ job’s duties, required experience, skills and supervision needed.

Following his research into the issue, Al Moutaa said that he not only believes the chart system inaccurately represents the value of on-campus jobs, but could also be used by employers to justify unfair pay or hinder their ability to provide fair compensation.

“Another flaw of having a chart system is that it removes the ability for a department’s employer to give a wage that they consider rightful for the position they are hiring for, thus having to either use the chart system to determine a wage, or, in case of malicious intent, use the chart system as an excuse not to give a proper wage to the student worker,” Al Moutaa said.

During the Senate assembly, Al Moutaa made reference to previous Lanthorn reporting as well as his own findings to illustrate the disproportionate pay scales between on-campus employment sites and some of the same meal service chains at other locations outside GVSU.

Although the draft form of the legislation remains subject to change and has not been finalized nor presented to the full Senate, Al Moutaa has already begun to consider potential solutions alongside colleagues with whom he has begun legislative efforts.

“To mitigate that, we are considering getting rid of the wage rate classification system completely in favor of promoting job postings for campus jobs to be based not only on the local job market value but also on the level of experience the applicant possesses that is relevant to (their) position,” Al Moutaa said.

However, not all senators approached the preliminary discussion with such calls for reform. For some, the situation remains too nuanced to make any initial determinations.

“Just be careful when we’re talking about wages and note that we can’t just say we want an increase in wages, we need to come up with how they’re able to do such a thing,” Senate Executive Vice President Justin Frappier said. “If we simply just say, ‘Please raise wages,’ there’s a chance that the university says, ‘Okay,’ and then raises our tuition to raise (wages). I’m not saying that is what will happen, but the money, the funding to increase wages has to come from somewhere so we don’t have to be prepared to cut a degree, cut a program or do something like that.”

Frappier’s sentiments were agreed upon by other senators present at the assembly.

Vice President for Allocations, Ben Biermacher, said he believes taking time to coordinate with proper Senate entities would allow the body to use its legislative power to the fullest extent in order to find solutions.

“I think it’s pretty clear that there’s an agreement that student wages are an issue that we should be focused on,” Biermacher said. “How we go about that is obviously not as clear cut. However, this is about as clear cut of a Campus Affairs Committee issue as I’ve ever seen.”

With new leadership spearheading the committee, how it will proceed remains to be seen.

Vice President for Campus Affairs Bianca Muñoz, elected to the position just minutes prior to the debate over on-campus pay, told the Lanthorn that she hopes to use her new position to address the issue and take time to acquire input from relevant areas.

“In the upcoming weeks, I’m looking forward to working with my colleagues in Student Senate along with faculty, administration and the student body to see what we can do and what the student body wants us to do,” Muñoz said.

While Muñoz told the Senate of her ambitions to transition her committee away from campus events and toward an emphasis on legislation, she said that she remains in the process of creating a specific plan of action to do so. However, she said she is hopeful that, alongside the full body, taking appropriate time with an input-based approach will allow change to be made.

“I’m optimistic that we are going to do everything in our power to make sure that the students’ concerns are addressed,” Muñoz said.