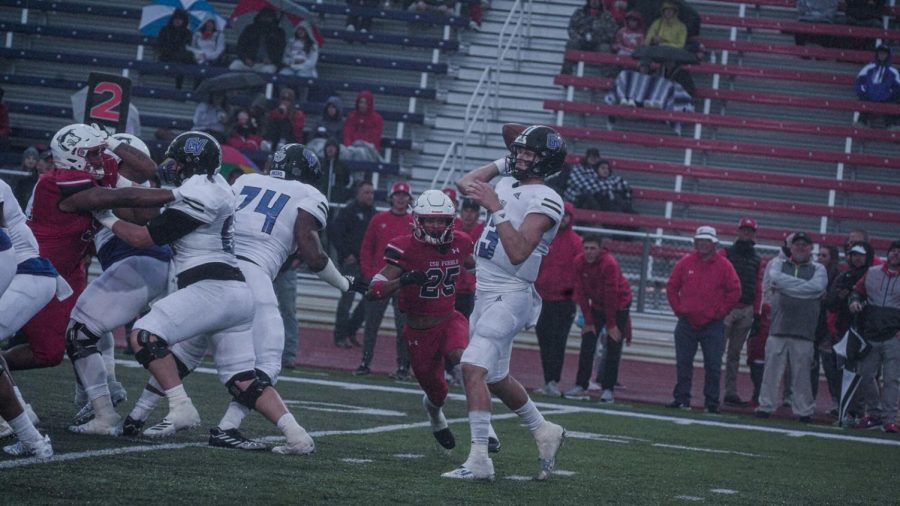 The Grand Valley State University football team (2-0) beat Colorado State University-Pueblo 35-10 this past Saturday, winning their fourth straight matchup against the ThunderWolves and improving their record to 2-0 on the season.

“For us to be 2-0 after two weeks against top-25 teams is incredible, I give lots of credit to our guys,” said head coach Matt Mitchell. “The weather wasn’t great, but we were efficient in the run game and we controlled the line of scrimmage. The defense got put in some tough positions, but they responded well.”

The Sept. 10 game started with a bang as junior quarterback Cade Peterson led the team right down the field on the opening drive, capped off by an 18-yard touchdown run by sophomore wide receiver Kyle Nott to put the first points on the board, 7-0.

Following the successful opening drive, the next two possessions consisted of a missed 35-yard field goal attempt by the ThunderWolves and a three-and-out by the Lakers. However, GVSU was able to put up a huge defensive stop once again, forcing the ThunderWolves to settle for a field goal and bringing the score to 7-3 which resulted in the final points scored in the quarter.

“We have a great defense, a lot of guys came back from last season,” Mitchell said. “We turned the ball over on the three (yard line) to give them their three points. We have a lot of depth on defense, it’s a strength and it’s very impressive.”

The Lakers’ first drive of the second quarter was very similar to the first, as Peterson drove the offense down to the goal line, where he ran the ball into the endzone himself on a read option, extending the lead to 14-3.

Colorado State found some momentum in their responding drive as they were able to score a long touchdown to make the score 14-10 with just under 13 minutes left in the first half, but this would ultimately be their final points scored for the remainder of the game.

Later in the quarter, sophomore quarterback Avery Moore added seven more points to the lead, scoring a touchdown on a quarterback keeper, pushing the lead to 21-10 as GVSU continued to put up a monstrous defensive performance heading into halftime.

“The biggest thing was that we executed and reacted well to what (the defense) did,” Peterson said. The offensive line and tight ends did a great job blocking, we all did a great job and we were able to run the ball successfully.”

The second half was nothing short of the first as the Lakers’ defense continued to stand tall against their reeling opponent. Although the defense was holding their own throughout the entirety of the game, the offense wasn’t able to expand on the momentum they built in the first half as much as they would have liked to- only scoring on two occasions.

Peterson drove the offense down the field after a big catch by sophomore wide receiver Jahdae Walker, and junior running back Tariq Reid powered past the goal line for a three-yard touchdown, extending the lead to 28-10 going into the fourth quarter.

It was all defense once more as a GVSU interception allowed for Peterson to drive the offense down the field once more and set up Reid for another chance to punch one into the endzone for the second time, this time from two yards out to make the score 35-10 and putting the last points on the board for the night.

A forced fumble and an intercepted pass would seal the victory for the Lakers as the game clock read zeros. Although the Lakers were able to prevent the ThunderWolves from scoring a single point in the second half, Peterson believes there was no change of effort between the first and second half defensive efforts.

“I don’t think (the defense) was different in the second half,” Peterson said. “We came off of a turnover, Jahdae made a great catch and we did great in the red zone. Starting out hot is very important. We went off the looks they gave us in the second half and we were able to score more points.”

With momentum on their side heading back home to face Lincoln University, Mitchell wasn’t going to allow himself or the team to get ahead of themselves, but instead, focus on the victory at hand.

“It’s hard to tell (what it will take to win the game), it’s going to be tough,” Mitchell said. “I don’t look ahead, I take it one game at a time.”

The Lakers will kick off their second home game of the season against the Oaklanders on Saturday, Sept. 17 at 7 p.m. at Lubbers Stadium.