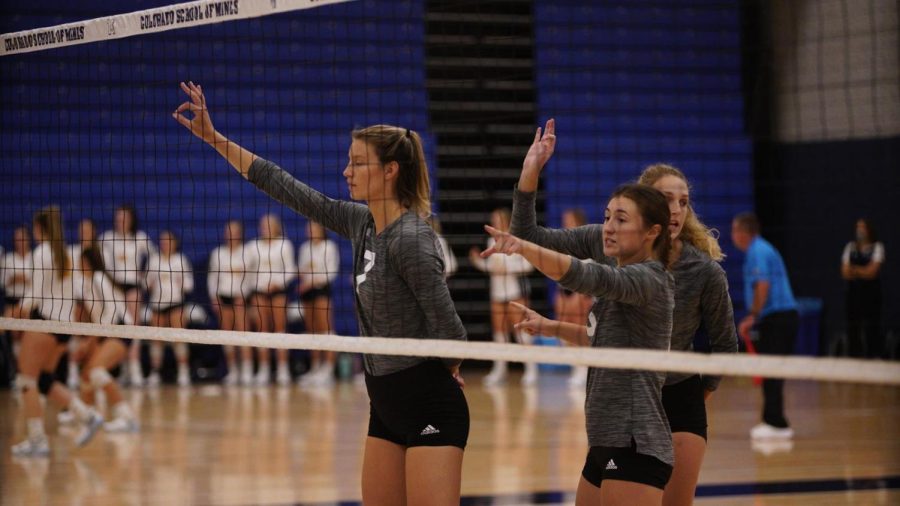 Grand Valley State University women’s volleyball traveled to the UP to compete against GLIAC rivals for the first time this season, losing their first match against Northern Michigan University 0-3 on Sept. 9 and dominating Michigan Tech 3-0 the following day.

The match against Northern Michigan was evenly matched in the first two sets with neither side able to maintain the lead as it switched back and forth multiple times. However, the first two sets would ultimately fall in favor of the Wildcats as they just escaped the Lakers 23-25 in both sets.

GVSU seemed to regroup for the third set, jumping to a commanding 16-9 lead. However, the Wildcats made a ferocious comeback of their own and took control, going on a 5-16 run to defeat the Lakers 21-25 and complete the three-set sweep to finish the match.

Having a lead is one thing, but most athletes admit that maintaining a lead and closing out a win is much harder than it looks on the surface. Although the Lakers were unable to snag a set win, GVSU led all three sets in crunch time but succumbed to their opponent’s offensive attack in each one (first set, 22-21 lead, second and third sets, 20-19 lead).

Head coach Jason Johnson attested to this fact as he said there was work needed to be done by the Lakers in order to avoid a repeated matchup like the one against the Wildcats.

“We talk about it all the time,” Johnson said. “The end of the set takes a different level of focus and execution because teams are trying to survive. We have to be better at executing at the end when we’re trying to close things out.”

“It was a really quick offense,” Jacquay said. “When they were in (the) system, they would just pump it to the outside or run the right side really quickly. We just weren’t able to shut them down like we normally would.”

After the loss to NMU, the Lakers traveled to Houghton the following day to resume conference action against Michigan Tech.

GVSU entered the match against the Huskies with aggression, determined not to fall short again as they swept the competition and finished the sets 25-22, 25-13 and 26-24.

Primus and freshman outside hitter Kendall Stover led GVSU offensively with 11 kills each, as Gates and Wight followed close behind with 10 kills a piece. Gates played a huge part in the Lakers’ momentum once more, totaling 25 assists and 17 digs, with Jacquay adding 17 assists of her own.

“We knew that wasn’t how we can play (against NMU), so we just talked about how we need to play our game,” Wight said. “The biggest thing for us was staying together as a team and supporting one another. We went into the match today with that mindset, and that helped us win.”

Splitting their weekend games 1-1, the Lakers are now 7-3 overall on the season and 1-1 in the GLIAC standings.

Although it wasn’t the start they wanted to have in conference action, Johnson is confident in the team’s ability to bounce back and continue adding more numbers to the win column as the season progresses.

The Lakers have persevered despite being poised against a tough start to the 2022 schedule with 12-straight away games before they play their first home game of the season.

“We’re getting better week by week,” Johnson said. “As long as that trend continues, I like our chances of competing in the conference for a championship. If we continue to fight our way through the next few weeks on the road, I like where we’re at when we turn the corner and get more home games at the end.”

The team will play the first of their last two away games against Purdue Northwest on Friday, Sept. 16, with a match against Parkside the following day.